Authorities say a teen felon is solely to blame for a horribly botched police sting in rural Missouri that ended with a cop fatally shooting a young woman who tried to help officers.


The young felon was wanted on probation violations and had reportedly been ducking cops in his hometown for days. On May 5, he was riding in a car with 21-year-old Savannah Hill and another woman. Hill knew Farris had a warrant out for his arrest and wanted to help officers get him into custody, according to court documents.

She called police from the bathroom of a Casey's gas station and hatched a plan to have officers pull them over. Farris would just run if police tried to take him at the gas station, Hill warned, but if police conducted a traffic search instead, he would instead be trapped in her backseat by child safety locks on the doors.

Police apparently agreed — a decision that would not only cost Hill her life but also injure an officer.

Authorities say officers stopped Hill's car as planned, but when they approached, Farris flipped out. According to court documents, he lunged into the front seat and jammed Hill's leg down on the gas pedal to try to get her to drive. The car instead lurched backward and smacked Aurora police officer Chris Kozisek. A second officer, David Chatman, opened fire on the car, hitting Hill.

The mother of two lived through the weekend but died Monday at Mercy Hospital in Springfield.

"The fault in this lies solely with the defendant," Lawrence County Prosecuting Attorney Don Trotter told the Joplin Globe.

Trotter is prosecuting Farris under a section of Missouri law that holds defendants responsible if they try to flee from a felony crime and another person is killed as a result.

A St. Louis man was charged under the same provision last week. Christopher Stevenson, 30, of the Greater Ville neighborhood in north city was stopped on May 7 by city police investigating a recent homicide. When officers got out, he sped off, making it just two blocks before slamming into another car, authorities say. The impact flung the other driver, nineteen-year-old Treyvion Cross, out of a window, killing him. 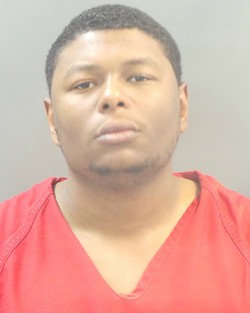 In Lawrence County, a judge has now ordered Farris to be held without bond. The teen already has a lengthy rap sheet with a variety of charges, mostly linked to meth.

In 2015, when he was seventeen, Aurora cops chased him on foot and tackled him. He had been carrying two knives, a pair of glass pipes and a bag of meth, according to a probable cause statement. It was the third time in less than a month cops had caught him with meth, they said.

He was sentenced to five years in prison in 2016 for violating probation. It's not clear why he was not incarcerated on the day Hill was killed.

Hill's heartbroken father, Chris Nethery, told television news station KOLR10 that the family is waiting for a state police investigation into his daughter's death and urged others not to jump to conclusions.

"There are bad officers just like there are good officers," Nethery, a dispatcher and son of a police officer, told the station. "Which ones were involved in this one, I have no idea."

Whatever the investigation uncovers, he says it will not make burying his daughter any easier. He was happy, however, that authorities have publicly cleared his daughter's name and found her to be an innocent victim.

In a prepared statement, he told the Springfield News-Leader, "At this time the family is ecstatic that we have the first part of this investigation that proves that our initial feelings — that Savannah was not in control of the vehicle, that she was assisting law enforcement and ultimately became an innocent victim of this tragic incident."