Is This Your Bayonet? St. Louis Police Found It in a Literal Thieves' Den 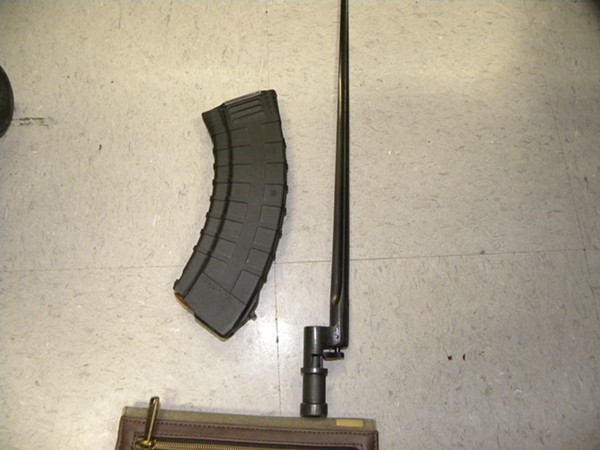 The bust of a startlingly productive group of thieves last month uncovered so many items, St. Louis police are now turning to the public to identify their property.

Yesterday, following weeks of effort, the department announced that it had uploaded photos of hundreds of items, many of which had been stolen from cars in the downtown area. In all, the department uploaded 735 pictures of the stolen goods, a mammoth collection of purses, tablets, music gear, hunting bows, computers and, yes, the above bayonet.

The police effort to document the items underscores both the ambitious scope of the theft ring and the technical difficultly of reuniting those items with their true owners.

For one thing, the police webpage isn't searchable by category, meaning that anyone hoping to find a lost purse or computer might have to click through all seventeen pages. Additionally, while some of the items photographed seem fairly easy to identity, such as purses, there are also photos like this box of tangled cables, marked SDC14697.

Or this impressively smashed iPhone (SDC14593).

As for the culprits responsible for yanking all this stuff from St. Louis cars, the case is ongoing. Four suspects have been charged in connection with the thefts, and the St. Louis Post-Dispatch reported yesterday that three of them — Lamonte Brown, Jason Holmes, and Khatira Hunt-Rogers — are linked to more than 100 local car break-ins. They've also been connected to burglaries in at least four other states.

On April 19, the St. Louis Metropolitan Police Department announced that officers had found the items piled up at three houses. The amount of stolen goods stunned even the detectives on the scene. Which begs the question: Why stockpile the items like a hoarder? According to the daily, police believe the suspects were selling the items online, but clearly they were bringing in more merchandise than they could move.

The aggressive actions of their victims may also have been a factor. As RFT reported in 2015, the Columbus, Ohio-based band Two Cow Garage discovered its own stolen equipment while searching for replacements on Ebay. At the time, the band members claimed that the St. Louis police wouldn't return calls, and the police, in turn, pointed the finger at Ebay for slowing the investigation.

Years later, police have connected the recently recovered items with various bands, including Two Cow Garage. In fact, one band member emailed RFT in April to inform us that the drum posted as the lead image in our initial story of the thefts was one of the items tkaen from the band's van back way back in 2015. (The Post-Dispatch also notes that the police have also connected the items to thefts from bands at the Firebird.) Two Car Garage's efforts may have spooked the thieves into trying to lay low for awhile on the resale front.

But though the process has taken years, the law is finally coming down on the thieves. Holmes and Brown are each facing three counts of property crime and stealing. Prosecutors charged Hunt-Rogers with one count of stealing, and a fourth suspect, Eric Buckner, is charged with with unlawful possession of a firearm.

All four suspects are out on bond.

Here's the link to the police website hosting images of the stolen goods. According to a police press release, people who believe their property is among the items are encouraged to contact the Fourth District Detective Bureau at recoveredproperty@slmpd.org.