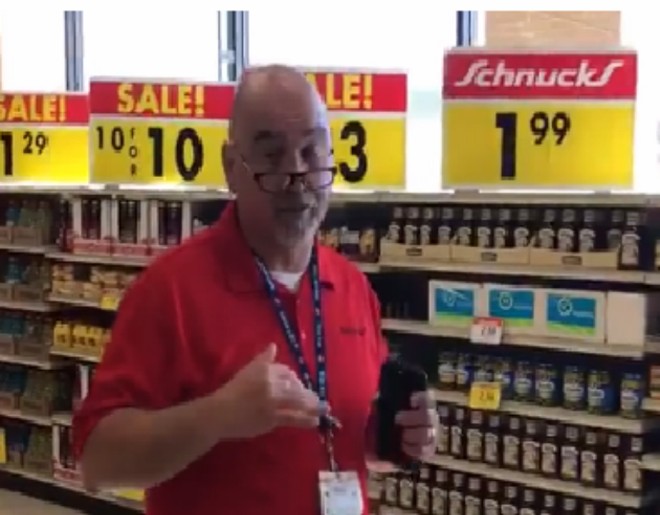 It been an ugly few days for St. Louis stores and black customers. First, Nordstrom Rack employees in Brentwood tried to have three teens arrested for shoplifting, even though they weren't.

And now Schnucks is dealing with its own nasty confrontation.


On Monday, the local grocery giant fired a white worker at a south St. Louis County store who refused to give a black couple a money order and called the cops on them, even though they had cash.

On Monday, as a series of videos of the encounter went viral on Facebook, the grocery store chain's top executive offered a public apology.

"This should not have happened," CEO Todd Schnuck said in a written statement posted to the store's Facebook page.

The customer, Kellen Hill, posted the videos after he and then his girlfriend were refused service at the Concord Village location. Hill says on camera that he had gotten money orders at the store since November with no problem. But when he tried to pay with a debit card over the weekend, he was rejected, even after providing an ID and then later returning with cash. Hill says the worker told him it was because people were "doing fraud."

In his statement, Todd Schnuck says the grocer has tightened policies recently because of a rise in fraud. But the CEO says that should not have been an issue once the couple provided cash.

Hill and his girlfriend, who was dressed in hospital scrubs after leaving work, had $1,100 for the money order. They planned to use the money order to pay their rent. But still the man refused.

Other customers rallied to the couple's side, arguing with the worker. One woman asked if someone else could purchase the money order for the couple. "I'd rather not do that, no," the man replied. He said he was following a new policy.

When Hill pressed the worker for details about the policy, the man clammed up.

Hill, incredulous, tells him: "Racial profiling is not good, bro."

"We're not racial profiling," the worker replies, before heading off to call management.

The man eventually relents and sells the money order, offering an apology. But it was too little to late for the couple and for Schnucks brass.

Todd Schnuck says he wants all of the company's customers to feel comfortable in their stores.

"I deeply apologize to the customers and am incredibly disappointed in the poor judgement that was used in handling this incident," he says. "Although the teammate was focused on the recent increase in fraud, once the customer produced cash for the transaction, the money order should have been sold without further issue."

Nordstrom, too, has apologized over its treatment of three local black teens last Thursday. "We didn’t handle this situation well, and we apologized to these young men and their families," the company said in a statement. "We’re enhancing our internal practices and trainings to help ensure this doesn’t happen again. We want all customers to feel welcome when they shop with us, and we don’t tolerate discrimination of any kind.”