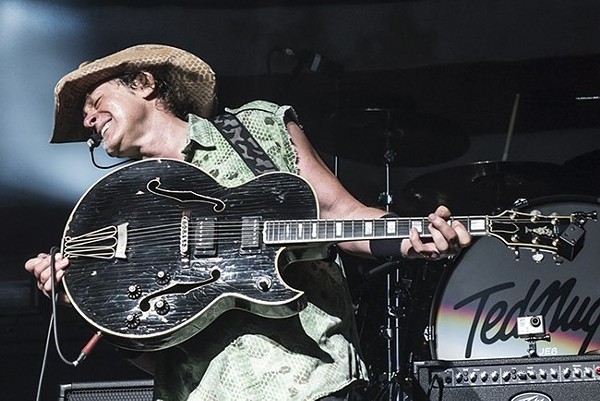 A two-year-old blog post has landed the St. Louis Post-Dispatch in federal court.

In a lawsuit against the daily filed Friday, photographer Larry G. Philpot alleges that the paper uploaded his 2013 photo of Ted Nugent to illustrate a March 2016 blog post — and did so without crediting him or including his watermark.

Philpot had published the photo on Wikipedia under a Creative Commons license. That allows others to use the photo, so long as they include attribution (in this case, "photo by Larry Philpot, www.soundstagephotography.com"). But the Post-Dispatch didn't include any credit whatsoever.

A check of the story today shows that the offending photo has been removed. But archive.org, which periodically "saves" older versions of web pages for posterity, shows that Philpot's photo was on display for at least two months. (It may well have been more; archive.org hasn't archived the page in question since.)

Philpot is now suing for copyright infringement and violations of the digital millenium copyright act.

Spokeswoman Tracy Rouch said the newspaper does not comment on pending litigation.

Photographers at the Post-Dispatch have been aggressive about protecting their copyrights — to the point of issuing takedown notices to those who tweet their photos. Most recently, one of the paper's photographers argued that Democratic operatives were not entitled to use its photo of Governor Eric Greitens and Attorney General Josh Hawley looking chummy, despite the possible argument that commentary on the photo was "fair use" under the First Amendment.

But Philpot, too, has been aggressive about protecting his work. Court records show he's sued over copyright infringement dozens of times in federal court, and one citation suggests he was able to pocket $5,000 plus a $400 filing fee.

Philpot is being represented by Keith J. Grady of Polsinelli PC.