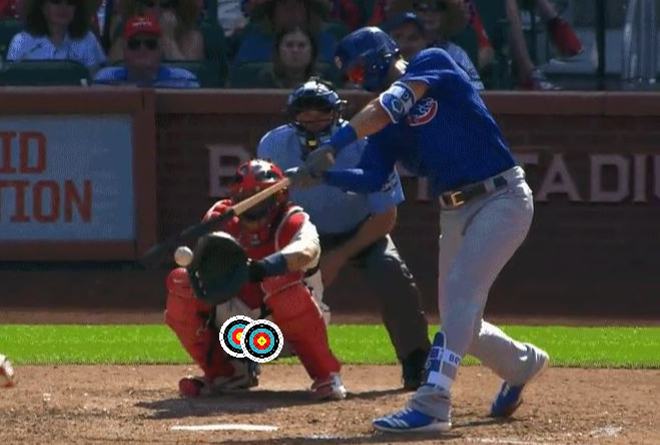 Thanks to clips immediately shared on social media, untold thousands of Cardinals fans and groin-having humans have watched, in horror, as beloved catcher Yadier Molina took a fastball to the groin on Saturday.

Let's take a look at that clip one more time. (Also, sorry.)

The ball, a foul off the bat of Cub Kris Bryant, was reported as traveling at 102 miles per hour and left Molina rolling and doubled-up on the ground. Yet Molina was able to walk — yes, walk — off the field, which is amazing considering he reportedly suffered a traumatic hematoma that required immediate surgery. Molina will be out of commission for at least a month.

In the wake of such heinous ball-busting, the landscape of Twitter became filled with calls for prayers, sympathy and well-wishes for Yadi's injured trouser boys.

Some commented simply to ruminate upon the vicarious anguish of having a baseball encounter one's balls at 102 mph. Others weighed in to express their admiration for the catcher's courage.

As a former catcher, taking a foul tip in the nuggets is less than ideal. Let alone a foul tip off a pitch that’s coming in at 102. How Yadi could walk off on his own power is unbelievable.

It doesn't matter if you like Yadi as a person or player; nobody deserves such a fate.

"yadier molina" Even if I am not a big fan of this guy... I unfortunately know what he has to go through and I don't wish that on my worst enemy.

Pray for Yadier Molina i wouldn’t wish that on anybody

watching the replay of the foul that knocked out Yadi, does every guy get that queasiness and lack of breath from getting hit in the nuts feeling, or is it just me?


And no, it's not just you, Chandler.

My balls hurt just looking at that replay. Omg that was 102 mph foul tip, straight to his balls.


Others commented on the fateful coincidences at play: Last season, Molina took consecutive foul tips to the head, the second of which concussed him and forced him out of the game. The bat that sent the second foul into his mask was hit by none other than the Cubs' Bryant .... the same perpetrator as this weekend's spherical assault.

Last year Yadi’s season ends after suffering a concussion on consecutive foul balls off the bat of Kris Bryant. This year he’s out a month after surgery following a foul ball off the cup by ...Kris Bryant. Moral: don’t pitch to Kris Bryant.


A few noted the irony that, during the following game Sunday night, the Cardinals defeated the Cubs in thrilling fashion, with a walk-off homer from former Cub and all-around good dude Dexter Fowler.

The Cubs must feel like they just got hit in the Yadi.


Thankfully, it appears that Molina's surgery went well. In fact, the catcher's older brother told KMOX that Yadi was walking around his hospital room like he didn't just absorb 102 miles per hour of NOPE into his groin.

So that's good news, and hopefully Yadi and the Cardinals can soon move on to better things. If, however, you would like to commemorate the moment Molina's balls were turned into crash-test dummies, there's a guy apparently trying to sell the ball on Ebay. Yeesh.