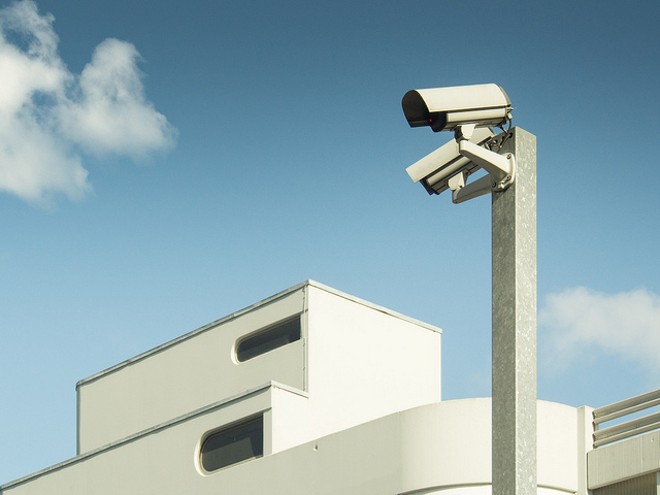 A new effort by members of the St. Louis Board of Aldermen and a group called Privacy Watch STL aims to regulate the use of surveillance technology across city departments.

The city's use of surveillance is on the upswing, the group says. The city launched the Real Time Crime Center in May 2015, allowing for police to monitor activity throughout the city in, yes, real time via surveillance cameras, including license plate recognition systems, which scan traffic for stolen cars. Police say the privately funded center has increased safety for both citizens and police officers. However, as the number of cameras continues to grow, many individuals have begun to voice concerns about their privacy rights.

"This could not come at a more important time," says Alderwoman Cara Spencer. "As we start to implement mechanisms of surveillance, we have got to make sure that we are safeguarding the public and their rights to their own privacy."

Spencer and the other aldermen at the press conference Friday stated that they have all heard concerns from constituents about the surveillance cameras.

In 2016, the St. Louis Post-Dispatch reported that 500 surveillance cameras located throughout the city connect to the Real Time Crime Center. John Chasnoff, member of Privacy Watch STL, says that number could have easily grown by 200 over the last two years based on reports the group has seen.

Currently, the cameras are heavily concentrated in areas like the Central West End, where businesses and restaurants line the streets. But steadily, residents are beginning to see the cameras dotted throughout parks as well.

"We're not seeing many go into the neighborhoods, but we're afraid it's right around the corner," says Chasnoff.

The cameras have a direct feed into the Real Time Crime Center, which allows the police department to tap into information gathered by cameras bought and maintained by various city neighborhood associations.

And yet, those at the press conference say, the whole system has been implemented without a regulatory framework to safeguard citizens' rights.

"Any time a government involves itself in the surveillance of its citizens, we must make sure that it is done in both an equitable and fair manner," says Alderman Terry Kennedy, co-sponsor of the Surveillance Accountability Bill.

During the 2017-2018 session, Kennedy and co-sponsor John Collins-Muhammad introduced Board Bill 66. It called for regulation of surveillance technology use and for the submission of Surveillance Program Plans, which must be reviewed by the Board of Alderman before being implemented. (The bill did not pass.)

"We recognized then that there were other things we needed to add," says Kennedy. "This bill is not an attempt to stop the use of surveillance equipment in the proper places."

Attempting to straddle the line between privacy and safety, the new bill will require many of the same things as Board Bill 66, along with accountability reports for installation and continued use of any surveillance equipment. It also will clarify some confusing language and definitions about what surveillance equipment is.

Residents in areas with high crime are requesting more cameras, Kennedy says, while others are afraid that the footage could be used in an unfair way. The point of the legislation, he says, is to help strike a balance between protection and privacy.

Some of those concerned with the usage of surveillance equipment are local activists and immigrant communities.

Kendra Tatum, an organizer with the Organization for Black Struggle, says one camera is pointed directly at MoKaBe's, a frequent meeting spot for activists. "You can conclude that police are using surveillance cameras as an intimidation tactic against First Amendment rights," she says.

Tatum points to other tactics, such as tearing down vacant houses and transforming the land into parks, as successful ways to reduce crime, rather than singling out members of a community.

Caroline Fan, executive director of Missouri Immigrant and Refugee Advocates, says many immigrant communities are afraid to talk to the police because of the surveillance cameras. She points to the history of Japanese-Americans, who were under surveillance by the U.S. government during the 1930s and eventually placed in internment camps.

"Surveillance can lead to really horrible policies like this," she states.

At the moment, there are no requirements for the police to supply any citizens with information about the data the surveillance equipment collects.

Supporters of the bill say they recognize the importance of public safety and law enforcement's ability to respond to emergencies quickly. What they hope to implement are regulations regarding how long data can be stored and manage the ways in which it can be used, as well as starting conversations between the public, lawmakers, and law enforcement about how to best protect all citizens.

Policymakers and community supports are encouraging others to lobby in support of the Surveillance Accountability Bill until it is passed. "Anytime government uses this type of technology to surveille on a consistent basis, its citizens" says Kennedy, "we must make absolutely sure their rights have not been transgressed."

Editor's note: A previous version of this story provided an incorrect name for the organization for which Caroline Fan serves as executive director. She runs the Missouri Immigrant and Refugee Advocates. We regret the error.