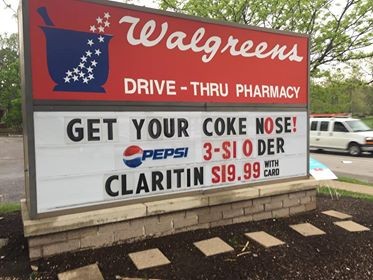 This is getting to be a trend. Just the other day we reported that the lettering on the street-level marquee sign outside the Walgreens store at the corner of Kingshighway and Arsenal had been rearranged.

Someone had cleverly rearranged the letters of "BUTTERFINGER" into something completely inappropriate. This gag bought us all a lot of laughs, but the sign was quickly updated once Walgreens management realized what had happened. We thought our fun was over.

But then yesterday the very same sign was the target of more unwanted attention. Reader Edward Noud reported seeing that the letters on the other side of the marquee had been rearranged to something undesirable again and sent us the above photo.

Surely, this pharmacy was not trying to sell you illicit drugs, right? (Well not the non-prescription kind, at least.) Nope, it sure wasn't.

Originally, the marquee was supposed to advertise "Red Nose Day" on May 24, 2018. The Red Nose Day campaign is a national fundraising campaign run by Comic Relief USA that aims to assist kids in need. You can buy a clown nose at any Walgreens for $1 and the money goes to childrens' charities, including Save the Children and the Boys and Girls Clubs of America.

We stopped by this morning and the sign was back normal, with "coke" on one side and "red nose" on the other. Sigh. Walgreens just doesn't want us to be happy, we guess. But they do want kids to be happy. So stop into any store near you to give a buck to the poor kids, why don't ya? It will make you feel better about laughing like an immature idiot at this.