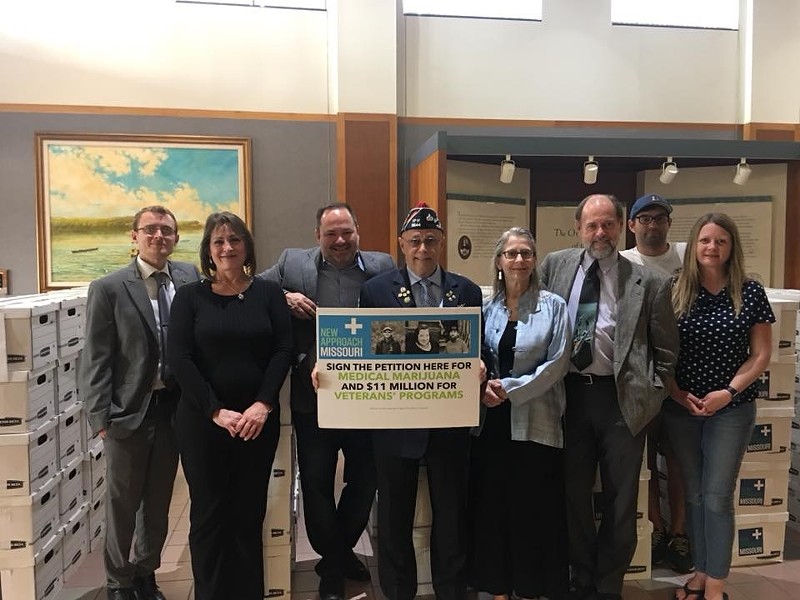 For two groups aiming to place medical marijuana initiatives on the 2018 ballot, Friday was a race against the clock — and each other.

They were two days away from a deadline to file petition signatures. Both had hoped to turn in signatures to the Missouri Secretary of State first.

For one of the groups, New Approach Missouri, the petitions are a chance to move past a near-miss in 2016. The organization, which aims to change the state’s constitution to allow medical marijuana, thought it had collected enough signatures to place a medical marijuana initiative on the ballot then, but election officials declared more than 10,000 signatures invalid, ruining its hopes of making the presidential ballot.

This morning, the group turned in more than 370,000 signatures — even though it only needs about 170,000 — and tried to “obtain a five percent buffer” on signatures in each congressional district, says Michael Hill, a New Approach board member.

The organization also used a different company, FieldWorks, to gather signatures this year. The company is “very conservative when they review signatures,” Hill says.

“We feel very confident with the company we hired,” he adds.

New Approach appears to have gotten its signatures in before Find the Cure, a medical marijuana ballot initiative financed by Dr. Brad Bradshaw, a Springfield physician and personal injury attorney. It also takes aim at the state’s constitution. A Find the Cure spokesman said Thursday that the group planned to turn in its signatures on Friday afternoon.

(A third initiative supported by former state lawmakers — and pushed by a lobbyist group funded by conservative Rex Sinquefield — would change state statutes. Complicating things even further, the Missouri House also this week approved medical marijuana legislation that now goes before the Senate.)

If the various initiatives all collect enough valid signatures — they will not find out until August — the group that files first would be higher on the ballot. And if both constitutional amendments receive 50 percent of the vote or more, the one that receives the most votes would become law.

Both New Approach and a rival group acknowledged Thursday that whoever files first today could have an advantage. Studies have shown that ballot order can influence the outcome of an election, with voters more likely to vote for the first candidate rather than the second if they don’t know have a strong feeling about either. New Approach thinks the same could apply for competing medical marijuana initiatives.

On Thursday, a Find the Cure spokesman sounded confident that its initiative would be first on the ballot. He said they planned to turn in their signatures at 4 p.m. Friday, but questioned whether New Approach had actually collected enough signatures this time.

After all, it doesn’t help to get in first unless you actually have the signatures to qualify.

“Everyone claims they have 250,000, 300,000 signatures,” says Find the Cure spokesman Marcus Leach. “But none of them have done what we have done, which is hire two independent companies to validate the signatures, so I wouldn’t be surprised if New Approach does what they did last time…. We are 100 percent certain that we will be the first medical marijuana effort ever on Missouri’s ballot.”