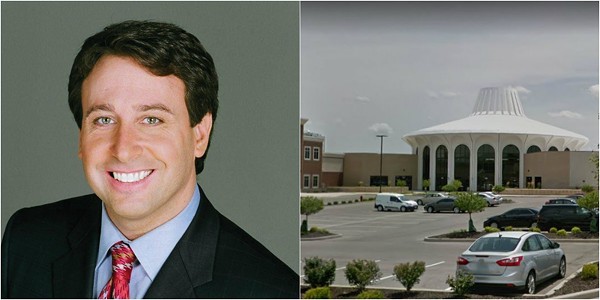 Ever since the St. Louis Post-Dispatch started connecting a series of hefty campaign donations with St. Louis County Executive Steve Stenger's efforts to commit the county to leasing property owned by those donors, Stenger has found himself grappling with many, many questions.

Most recently, those questions have come from St. Louis County Council's ethics committee, which has taken testimony and pored through thousands of pages of documents and emails searching for answers. Members of the council says they were misled, never fully understood the lease, and, in the case of at least one adviser, never even bothered to read it.

Last week, in a seven-page letter from ethics committee chairman Ernie Trakas, the county executive was given a May 11 deadline to clear the air. The seventeen questions in Trakas' letter included one about Stenger's July 2016 appearance on McGraw Milhaven's radio show on KTRS.

As a whole, the letter's questions show the sprawl of financial and ethical issues arising from Stenger's involvement in closing the deal to move several county offices to the former Northwest Plaza Mall in St. Ann, now called Crossings at Northwest. (Since 2015, Crossing's owners, developers David and Bob Glarner, donated an eye-popping $365,000 to Stenger's campaign chest.)

But when Stenger got on the radio in 2016, he insisted the deal was a good one — it would save the county $10 million, he said. "This is a lease that has been vetted both internally and externally," he told Milhaven. "We had financial advisers outside of the county look at it and validate the numbers, we had our internal staff look at it and validate the numbers. We did a competitive process in order to arrive at the decision to move forward with this lease."

Stenger also claimed that he intervened to personally negotiate with David Glarner after things "got a little heated" between the developers and county staff working the deal.


In retrospect, Trakas alleges, just about everything Stenger said on the air has since been proven to be false.

For one thing, the $10 million figure was eviscerated by a Post-Dispatch financial analysis published this year; the newspaper found the lease contained no savings, and would in fact cost taxpayers as much as $8 million more than the old set-up.

For another, says Trakas, much of what Stenger attested to in 2016 has since been contradicted by his former campaign manager, Anthony Badino. Badino, who served as Stenger's front man and intermediary while negotiating with the Glarners, was grilled by Trakas during a committee hearing last month. Trakas says Badino's testimony clashed with Stenger's 2016 comments on virtually every point.

For instance, as Trakas points out in his letter, Badino not only testified that "there had not been a competitive process to determine the price of the lease,"  but that there had been no outside financial analysis.

And Stenger, Badino testified, was not involved. "I asked him quite specifically a series of questions about Stenger's involvement," Trakas tells RFT. "Mr. Badino's answer was that he was not present during any negotiation."

Trakas is also concerned that the evidence he's uncovered fails to show that the county ever put the lease under the proper financial microscope. Only one document — a one-page spreadsheet — indicates the county did an internal financial analysis prior to signing. And in any case, as revealed by the Post-Dispatch analysis, it embarrassingly failed to take into account its responsibility for property taxes. Those taxes would erase the so-called $10 million in savings touted by Stenger.

As for the "outside" analysis Stenger touted on air, Trakas says, the committee hasn't found any evidence it exists.

Still, Trakas cautions that the committee isn't accusing Stenger of intentionally misleading the public in 2016. At least, not yet.

"We have more questions than answers at this point," he says.

He add, "We have little to support the contention that this was such a great deal for county taxpayers. Frankly, everything we've seen would lead you to the opposite conclusion."

Stenger still has two weeks to respond to the ethics committee letter, but he did provide RFT with a statement that contends Trakas' letter "distort[s]" the truth. He also blasts the committee's attempt to draw ammunition from his 2016 KTRS appearance and argues the letter's questions are "littered with inaccuracies and misrepresentations."

Directly contradicting Trakas, Stenger writes that Badino did testify that there was a competitive process and that the documents he provided the county council show "research and analysis done in regard to other properties."

But not everything Stenger attests to holds up to scrutiny. Of those "financial advisers outside of the county," Stenger points to a market study conducted by the St. Louis Economic Development Partnership, the economic development arm of St. Louis County. The partnership's board is appointed by Stenger and St. Louis Mayor Lyda Krewson — a strange fit for "financial advisers outside of the county."

Still, Stenger insists the deal has been a success.

"A once-dead mall is now a thriving commercial and governmental nexus," he writes in a statement to the RFT. "The Crossings is almost completely occupied, employs 2,800 workers and creates $328 million in annual economic impact for North County."

Editor's note: One sentence in this story was edited after publication to add attribution. We apologize for any confusion.