St. Louis Transplant SwipeSum Has a Big Gift for Its New Home 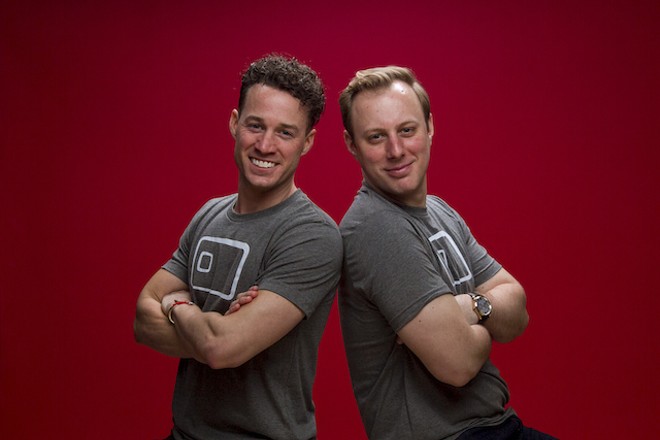 SwipeSum is one of the latest tech startups to hit the streets of St. Louis, relocating here from Los Angeles just four months ago. But the credit-card processing consultants already have a pretty sweet deal for their new neighbors: It's promising to give their services away for free to any company headquartered in St. Louis.

The offer is surely a bid at scoring some good press. But it also stems from its founders' excitement about SwipeSum's new home.

In 2016, Michael Seaman was managing West Coast sales for Monotype, a typesetting company in Los Angeles. A move to St. Louis was not something he envisioned for his career path.

But as Seaman climbed through the ranks at Monotype, he was also running a rapidly growing startup, SwipeSum, with his older brother Stephen Seaman.

Stephen, who had been living in St. Louis for four years, worked for Aegion Corporation in Chesterfield. He encouraged his little brother to consider the Gateway to the West as their company headquarters.

"I turned him down at first," says Seaman, now 30. "But then I came for a weekend and was blown away. It's a startup gem."

Like many others who have chosen St. Louis as a home base for their businesses, Seaman quickly realized the unique culture surrounding startups in the city. He found himself attracted to its affordability and culture, both things that couldn't be more different than Los Angeles.

"You can give away less of your company for long-term success," he explains. "It's an American, hard-working, passionate town."

In January, Seaman quit his comfortable job at Monotype, packed up his car and made the trek across the country. He's now all-in at SwipeSum, which is in the process of raising its first, $1.2 million round of investment and looking for more area investors.

He predicts that many other businesses will soon follow, as startups and established companies alike are realizing the benefits of growing a business in the Midwest.

When businesses accept credit card payments, they are also accepting the costs of processing those payments, which is set by the card company. Sometimes, the cost can be three percent or higher of their revenue. Usually, when a company doesn't accept a certain type of card, it's because their processing fee is too expensive for the merchant.

That's where SwipeSum comes to the rescue.

Seaman describes it as the first online marketplace for credit card processing. His company offers its clients a consultation. After that, SwipeSum works with banks and card companies to create a bidding war to help score them the best rate possible — a rate, he says, that's now theirs for life.

"Companies often don't know the price was negotiable," says Seaman. He notes that hidden fees often protect the card companies but harm the merchants, and that's something SwipeSum can work to eliminate as well.

To this date, SwipeSum boasts that it's saved companies $2.3 million, averaging $973 a month across its client base. These are the kind of savings they hope to bring to St. Louis businesses — without charge.

For St. Louis businesses looking to start saving now, the process is simple. Go to SwipeSum.com, click "Get Started,"mention you're from St. Louis and watch the savings roll in.

This initiative is just the first way the brothers plan to give back to their new home. After diving into the startup scene and working with the State Economic Partnership, Mayor Lyda Krewson and other entrepreneurs, they decided this is where they can best invest their time and resources.

A quick scroll through the company's website and YouTube channel reveals funny, informative videos but also show the brother's enthusiasm for their company and its journey in St. Louis.

In an introduction video, Seaman states, "We have aspirations of being the most dynamic tech startup in St. Louis. SwipeSum is expanding. We're here."