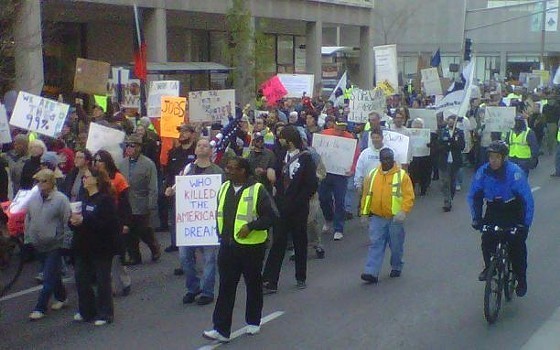 An Oklahoma native left with a fractured nose and a blackened eye after being arrested by St. Louis Police during a 2012 Occupy protest will get $100,000.

That's according to the St. Louis Post-Dispatch, which obtained details of Scott O'Rourke's settlement with the city through a Sunshine request. Under the terms, the city will be pay $15,000 and the state (which then was in charge of the St. Louis police) will pay $85,000.

In a November 2016 interview with the Riverfront Times, O'Rourke, then 27, explained that he had been at a May 2012 protest when some protesters used spray paint on a building. The property manager collared one of the painters, but he broke free.

Then the manager turned to O'Rourke in an apparent case of mistaken identity. Fearing violence, O'Rourke took off running.

When police caught up to him, he says, he put up his hands in a show of surrender. They maced him anyway, he alleges — and then cuffed him and took him down to the station.

At the station, he would later allege in a lawsuit filed by non-profit Arch City Defenders, he was asked for his address. Because he didn't have one, he gave a post office box.

According to the lawsuit, Detective David King allegedly shouted, "That's not a fucking address." He then "swung his arm across the interrogation table, punching Mr. O'Rourke in the face." Another detective, Steven Burle, watched impassively, O'Rourke alleges.

O'Rourke was initially charged with five felonies, and though three of those were reduced to misdemeanors, his case went to trial in April 2014. There, both Detective King and Detective Burle admitted that King hit O'Rourke in the nose, but said it was because O'Rourke had punched King first, with his right hand.

O'Rourke is left handed. The jury acquitted him on all counts.

As we reported at the time, Detective King and Detective Burle both had previous marks on their record. King had allegedly assaulted a man at a bar while off-duty in 2003. And Burle was accused in a previous lawsuit of standing by while other officers beat a suspect, much as he was accused of doing in this case.

At the time of his 2016 interview, O'Rourke told us that he still owed his defense attorney, Joseph Welch, and was hoping for a settlement to pay the $15,000 he owed. He also hadn't been able to afford surgery to repair his nose.

Beyond that, he said, the incident had changed his life. "It didn't really make me comfortable around the police in St. Louis any more," he said.