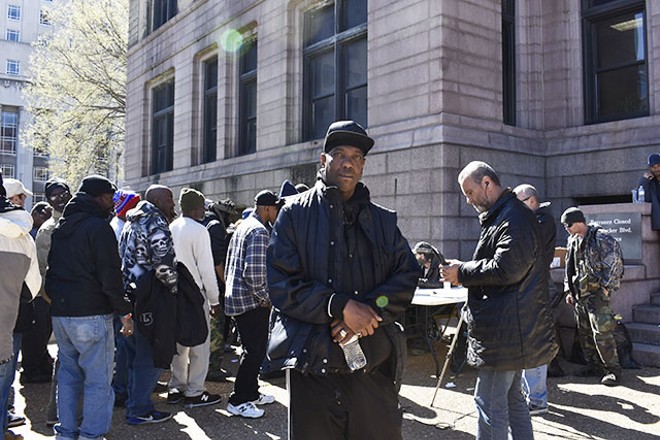 Going forward, if St. Louis'  homeless residents are denied access to bathrooms in restaurants or other businesses, they just might raise hell.

That's the message from the Rev. Larry Rice, who says he's launching a campaign to encourage "potty parity" in the city. "You're constantly pushed — push back," Rice instructed homeless people at a gathering Friday morning.


Rice, whose New Live Evangelistic Center in Downtown West was shut down by the city last year, hands out bus passes, clothes and food under Mayor Lyda Krewson's window at City Hall each week. But Friday, he made it clear he'd be using recent national controversies over bathrooms at Starbucks locations to advance an agenda.

His plan is simple. Armed with a hand-held camera, a pair of homeless people are to enter a restaurant and while one is filming, the other is to ask to use the restroom and not to take no for an answer.

"We're going to embarrass them until they help," Rice says in reference to area food franchises such as Saint Louis Bread Company, Starbucks and McDonald's.

Rice says he will then post the video to social media in hopes to garner a reaction like the one the followed a black man in Torrance, California, who was denied the access code to a Starbucks bathroom even as a white man was not.

As local porta-potties are now being locked at night and some restaurants are restricting bathroom access to customers only, Rice wants to draw attention to the lack of accessible bathrooms for homeless people while the firestorm continues on social media.

"I've been talking about this issue for years and now that it's in the national media; you can see it," says Rice.

For the last five years, Rice has been lobbying for porta potties to be placed around the city for homeless people to use. With little access to private restrooms, homeless people are often forced to find an alley or the backside of a dumpster to relieve themselves.

If caught urinating in public, homeless people risk receiving a $100 fine and other penalties. If they are caught multiple times, they can be registered as a sex offender and risk jail time.

Still, some homeless residents say they'd rather urinate on themselves than go through the ordeal of asking to use a restroom. One man, Alan, says he feels like he's being looked down upon when he enters restaurants. The few places that allow him to use the restroom force him to leave his belongings in the front dining areas. Alan says to avoid such circumstances, he usually finds a dumpster to go to the bathroom behind.

Jay Jay Williams is another homeless man who says he originally tried to use the restroom at the city's shelter, Biddle House. When he arrived, he found that they were closed for cleaning so Williams decided to walk down the street to the McDonald's on Tucker, where he was denied access to the bathroom.

Williams says he was approached by the security guard and asked to leave. Because he is currently on parole, Williams complied with the guards' orders and eventually found a quiet alley that was out of the way.

While many homeless people report that they have never been fined or arrested for public urination, those at Rice's outreach Friday all cited some form of intimidation from law force.

"They treat them like criminals. Dig through their things, abuse them," Rice says. "Have a heart. Have a little compassion."

Rice calls to a woman who has just gotten a bag of food from the volunteers:
"You live in your car don't you?" Yes, she replies. "And you need somewhere to clean up?" She nods her head with an exasperated smile, yes.

After quickly thanking Rice for help with gas money, the woman continues walking, maybe to her car or across the street to the park. Either way, she'll keep moving until she feels the need to brush her teeth or use the restroom. If she's lucky, she might be able to do those things in a bathroom.