If Eric Greitens Is Treating This Like Hell Week, Missouri Is Screwed 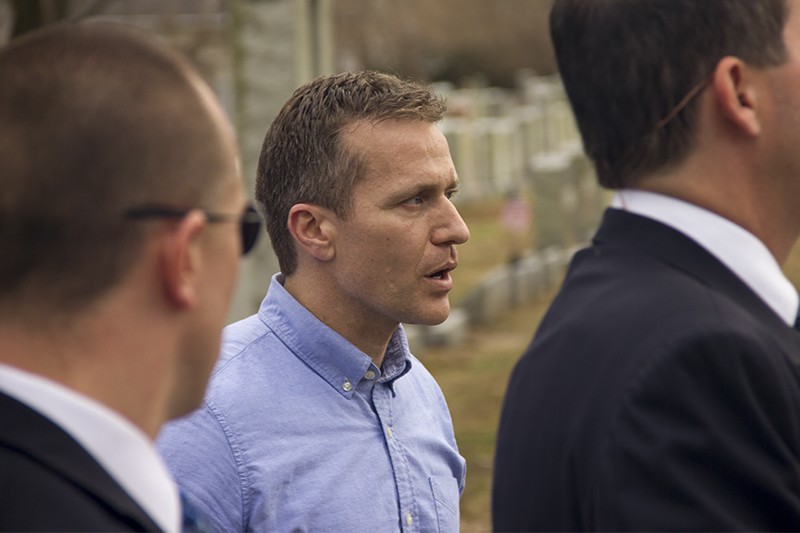 You might think that the governor is in hell right now. But it wouldn’t be the first time.

On Wednesday afternoon, when Eric Greitens called a press conference just one hour before the release of a committee report exploring reasons for his possible impeachment, some political observers assumed he must be preparing to tender his resignation as governor of Missouri. But Greitens would do no such thing. Even as the committee released an incredibly damning report charging that he'd hit and coerced a vulnerable woman, Greitens did the opposite: He doubled down on his defense.

During a carefully worded statement, Greitens’ eyes swung from left to right and then stared directly into the cameras as he reiterated that the report was full of lies and the result of a “political witch hunt.” He disparaged his alleged victim, claiming the report was "based on the testimony of someone who said under oath that they may be remembering this through a dream," an assertion that's misleading at best. And then he accused lawmakers on the committee as "smearing, lying and attacking people who want to change how things are are done."

It shouldn't have come as a surprise to any of us.

As he likes to constantly remind people, Greitens is one thing above all else: a Navy SEAL. That means he prides himself on being able to endure things mere mortals cannot. Of course he’s not going to resign. He’s been conditioned not to quit. Come a loss of his political ambitions and utter humiliation, yet still he marches on. We may well be stuck with him until or unless someone literally drags him out of the Governor's office.

The governor's first book, The Heart and the Fist, is illustrative. In it, he details an early time in his military career, painting the portrait of a disciplined young man looking to be tested like an ancient Spartan as he sought to survive the worst week of his life — what the Navy lovingly refers to as Hell Week.

Hell Week is the final test during Basic Underwater Demolition/Seal (BUD/S) training. Enlisted men train side by side in BUD/S for two weeks before engaging in Hell Week, which is exactly what it sounds like; bruising physical tests that push every fiber of your muscle to the limit, turning your mind to mush and shoving the very core of your being into a corner. Only if you pass are you granted operational training to become a Navy SEAL.

It is no easy feat. Drill instructors encourage men to quit daily. All they have to do is ring a bell three times. Ding, ding, ding.

Why hasn't Eric Greitens resigned already, sparing his wife and family and even himself? Just read the book. SEAL training has prepared him for this; he likely views this week of shame and utter friendlessness as another Hell Week, still convinced he's the hero in a story where everyone else considers him the arch-villain.


Every man has a different story of hell week... But in a larger sense, every Hell week story is the same: A man enters a new world with the aim of becoming something greater than he once was. He is tested once, twice, three, four, five times, each test harder than the last. Then comes the most difficult test of his life. At the end of the week, he emerges a different man. He has met the hardest test of his life, and he has passed or he has failed.

During Hell Week, Greitens trained his mind to endure the physical challenges and look ahead to meal time breaks to recuperate. Others might ring the bell; he presses on.


I can quit later if I have to, but this, whatever this is that I have to do—hold this log over my head, or sit in the freezing surf, or run down the beach with the boat bouncing on my head—I can do this for at least ten more seconds, and that’s really all I have to do.

After he completed Hell Week, he had lots of time to reflect on some of his fellow Navy servicemen who decided they couldn't complete the training. He concluded that it all came down to controlling fear. "We heard the bell ring — ding ding ding — they chose another life." The ding ding ding was for men who lacked his courage.

Ultimately, those insights gave him lower opinions of his fellow servicemen.

Wonder if he now sees himself as a whiner, a "this is not fair" guy crying "witch hunt"? Not a chance. Self-awareness has never been one of Greitens' gifts.

But perhaps the most prescient statement in this chapter is a final thought that demonstrates that even Greitens realizes that Hell Week might make a better soldier, but not a better person.


You emerge with swollen hands and swollen feet and cuts and bangs and bruises. You emerge weak and beaten. But the week does not transform you. While Hell Week emphasizes teamwork and caring for your men, it does not necessarily produce good people. Some of the best men I’ve known in the world are SEALs, but there are also some jerks, abusive boyfriends and husbands, men who fail to care, fail to lead, men with a few more screws loose, who also make it through Hell Week. Hell week tests the soul, it doesn’t clean it.


It's all there in his book — even the acknowledgment that endurance is not salvation. But we didn't need to borrow his book from the library to gain that insight into his character. We could have read it in the transcript of his victim's testimony to the House committee:


And he slapped me across my face, just, like, hard, to where I was like, 'What? Eric, what in the heck? You’re married. Why would – what do you mean?' And he just said, 'No.' Like, that was – you’re mine. This is – what do you mean you slept with your husband? You are not supposed to be sleeping with him, you know?

And I said, 'I think you’re screwed up from being in the Navy.'