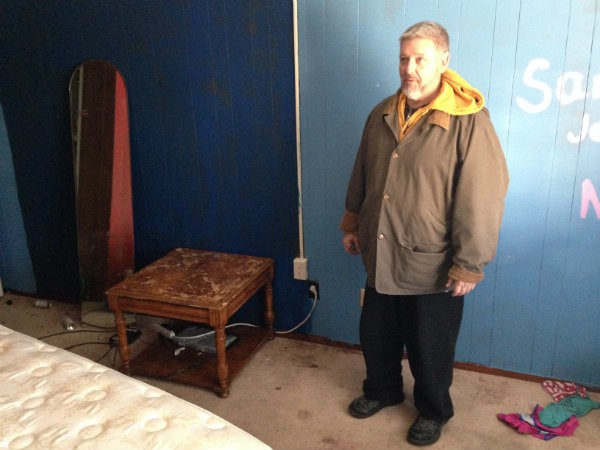 Assistant U.S. Attorney Jennifer Winfield said the martial arts expert used the Chrissy persona to correspond with and coerce young girls, including a few who lived with him in the converted Bevo Mill church where he ran a karate studio, school and pizzeria.

"This is a case about manipulation," Winfield said this morning during the opening day of Copp's trial for production of child pornography.

The case has been pending for more than two years. Acting on a tip, St. Louis police first raided Dojo Pizza in October 2015, which led to follow-up raids by the FBI. Law enforcement agents swarmed the building and seized computers and other electronic devices. Authorities say they discovered a cache of illicit photos and videos of underage girls on those devices, including some that included images of Copp sexually abusing juveniles.

A former preacher (and the subject of a 2015 Riverfront Times cover story), Copp has churned through attorneys as he waited behind bars in a St. Charles jail. Less than two weeks before trial, he decided he would represent himself with attorney Nathan Swanson of Rosenblum, Schwartz & Fry sitting in as "standby counsel."

His often bumbling defense has earned the occasional rebuke from U.S. District Judge Audrey Fleissig as she has tried to muddle through his attempts to put together basic witness lists, introduce a computer expert and gather evidence long ago turned over to a succession of previous attorneys. (Following a pre-trial hearing on Monday, Copp sent out a flurry of subpoenas, including one to me. We fought it in court, and Copp has since decided to withdraw it.)

"Mr. Copp, these things happen when you decide on the eve of trial to represent yourself," Fleissig chided him after one of many procedural missteps.

Still, Copp has continued to press on. He began his opening statement this morning with a proverb about how sinners run away, even when no one is chasing them.

"I know this case, and I know these charges, and yet I still stand," he said.

He told Fleissig he plans to show that numerous people had access to computers in the former church, which he operated as a quasi-community center. He also promised to bring forth alibi witnesses who will testify he was away from his computers when logs show they were in use.

Less clear is how he intends to explain photos that prosecutors say show him sexually abusing girls, sometimes capturing images of his own bad acts in mirrors. Winfield told the judge that Copp groomed his victims, meeting two of them at a church where he was once the pastor. In several cases, he was able to manipulate the mothers of his child targets, convincing them he would take care of their kids while the beleaguered parents dealt with poverty, substance abuse and even jail, Winfield said.

Copp at first brought girls to live with him and his wife in south St. Louis County. After someone called in an abuse allegation to a hotline, he split with his wife, took the girls and moved into the old Bevo church at the corner of Morganford and Neosho Street, Winfield said.

He continued to abuse the girls in Bevo and welcomed other juveniles to move into the rundown building, according to the allegations. When grooming his victims, Winfield said, he sometimes played what he called the "butt game" — sort of like a perverted version of tag.

"It initially started off as grooming and led to sexual abuse," Winfield told the judge.

The Chrissy account was part of the manipulation, prosecutors allege. The profile picture was that of a young, dark-haired girl, according to court records. And while she was purportedly from China, Winfield says that email accounts, phone numbers and backup phone numbers used to create the account all link back to Copp.

In fact, prosecutors suspect Copp used the account to chat with girls staying just down the hall from him in the old church, so close by that one of the girls heard the sound of the instant messenger alert from another room and grew suspicious.

"She would hear the 'ding' as she messaged Chrissy," Winfield said.

Investigators eventually found a copy of the Chrissy profile picture tucked away in a folder from one of the computers seized from Copp, prosecutors say. He is alleged to have tried to entice underage girls to send him nude and sexual pictures online.

During his statement, Copp insisted he was not Chrissy and promised he would deliver alibis showing he was without computer access at certain times when the account was being used. He claimed his mistake was allowing so many people use a computer lab he had set up in the former church.

"If I'm guilty of something, it's guilty of letting people come in and not being aware of all that can be done on a computer," Copp said.

At least two girls are expected to testify that Copp abused them. To protect their identities, Fleissig granted prosecutors' request to refer to them as Jane Does. News outlets that have covered the case, including the Riverfront Times, have also agreed not to identify them, which is standard journalism practice. Fleissig plans to extend that order to any members of the public who are in the courtroom during the testimony, warning that violators will be found in contempt of court.