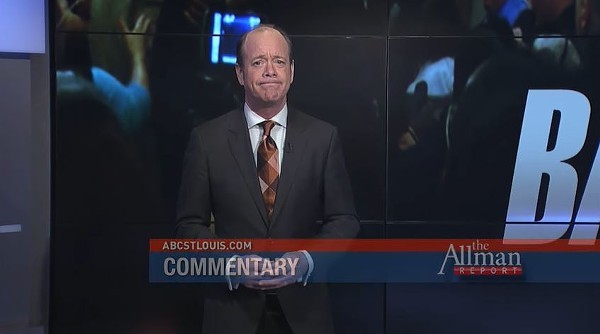 Update: Allman's radio show has been canceled, effective immediately. See our April 11 story for the latest

Jamie Allman wasn't on the air this morning — but he may yet be back.

One day after Sinclair confirmed that it had canceled The Allman Show on St. Louis' KDNL (ABC-30), Allman in Morning ran in its usual slot on 97.1 FM, only with former House Speaker Tim Jones at the mic instead of the show's eponymous host.

"Jamie is taking a couple of days off," Jones told listeners.

It may be more than that — or not. Last night, KSDK reported that Entercom, which owns 97.1 FM, "will be keeping Jamie Allman off the air at 97.1 FM starting Tuesday (4/10) while they gather facts and weigh all information."

Just in: Entercom tells me that they will be keeping Jamie Allman off the air at 97.1 FM starting Tuesday (4/10) while they gather facts and weigh all information. https://t.co/I1c3nkTkrC


Entercom is based in Pennsylvania and owns radio stations across the U.S. — including news radio KMOX (1100 AM), Y98 and KEZK (102.5 FM). It very recently acquired 97.1 FM from Emmis, taking over Allman's home station as of March 1. (The purchase is so recent, in fact, 97.1 FM does not yet appear on its list of properties in St. Louis.)

A former spokesman for the St. Louis Archdiocese, Allman has long been one of the city's most controversial conservative presences on both radio and TV. But he stepped over a critical line in late March with a tweet boasting about his plans to "ram a hot poker up David Hogg's ass" — referring to the seventeen-year-old school shooting survivor turned gun-control activist. Missouri Representative Stacey Newman (D-St. Louis) called for a boycott of his show, and after the Riverfront Times reported on the tweet Friday, national attention followed. Yesterday, KDNL's owner Sinclair Broadcasting announced it had canceled the show.

Neither KDNL nor 97.1 FM has responded to messages from the RFT seeking comment.

For now, though, Allman in the Morning not only continues to air, but has a fill-in host much in keeping with the original. Jones, the former Speaker of the Missouri House, has appeared with regularity on Allman in the Morning. (He also has his own Sunday evening radio show on 97.1 FM, The Tim Jones Show.)

And Jones has been an outspoken defender of his embattled colleague — calling Newman a "snowflake" for organizing the boycott. "He dared to stand up to David Hoog [sic]," Jones tweeted. "And for our Second Amendment."

He dared to stand up to David Hoog. And for our Second Amendment. Snowflake @staceynewman has decided to try to therefore weaponize all her leftwing liberal gun grabbers against him. #2A https://t.co/JkvpnHFFw7


We'll give Jones this — threatening a kid with a fireplace poker is, indeed, daring. Can't say we recommend it when you depend on corporate advertisers, but goodness knows the First Amendment allows Allman to say it ... and also to suffer the economic consequences.

The RFT's Danny Wicentowski contributed to this story.