St. Louis Police Policies Are Going Up Online, Whether SLMPD Is Ready or Not 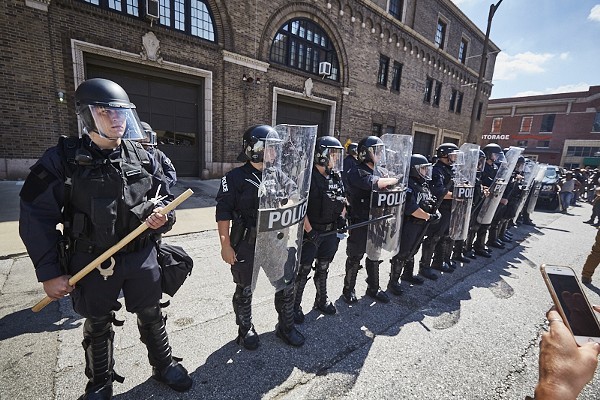 The police departments of many major cities publish their official department policies online. Even the Baltimore Police Department, recently caught in a major scandal, has a separate tab on its website labeled “transparency,” which explicitly acknowledges the importance of making those policies open to the public.

St. Louis, however, does not. In December 2017, Interim Police Chief Lawrence O’Toole vowed that, if selected to hold the job permanently, he would publish all departmental policies online. He even went a step further when pressed, saying he would show “all our records regarding discipline." O’Toole wasn’t chosen and Chief John Hayden has yet to publish them, and so the policies and records remain undisclosed.

Even prior to O’Toole’s promise, Philip Weeks intended to change that. On December 1, 2017, the activist put in a Sunshine request for the complete list of policies, manuals and special orders for the St. Louis Metropolitan Police Department. And even if the department isn’t ready to publicize them, Weeks is.

In an effort to collaborate with existing organizations to further the discussion on police accountability and transparency, Weeks recently launched an effort he calls Gram, an acronym for GRassroots Accountability Movement. Its website, jointhegram.org, allows readers to download PDFs of everything he’s received through his Sunshine requests.

“The police policies are, in theory at least, what protect our constitutional rights and protect our innocence,” Weeks says. “If we want to hold the police accountable, we have to know what the policies are. And really, that’s just the first level.”

Weeks says the effort came out of the protests that enveloped the area last September after former police officer Jason Stockley was found not guilty of murder by a St. Louis judge. The activist and organizer began talking to others about what could be done to combat injustices within the city.

“I just wondered how frequently these injustices happened that were violations of police department policy,” says Weeks. He began by looking into the cases of Vincent Carr and Bobby Lee Garrett, two city cops sentenced in 2010 on charges of stealing money and drugs, as well as planting drugs and arresting innocent citizens. From there, he made his Sunshine request.

On January 8, 2018, Weeks was sent part of what he was looking for, including the department’s manuals and special orders. Weeks has published the results of that Sunshine request on Gram’s website. The department initially declined his request for a complete set of policies, calling its fulfillment too burdensome. Weeks persisted, making more limited requests, and he says he’s been able to get most of what he’s looking for, even as he continues to push for more. With a Sunshine request that’s currently pending, Weeks will receive the department’s directives, what he considers one of the last missing pieces. He promises to put those online as well.

When asked about taking steps towards transparency, a police spokeswoman responded, “Chief Hayden is unaware of any promises made by Interim Chief O’Toole. However, he is open to posting our policies in the interest of public safety.” The spokeswoman continued, however, that any discipline records would not be made available.

After searching through what he was sent, Weeks was surprised that he never came across anything addressing a common thread of community policing: deescalation. The only exception: a reference to the effect that body cameras could have.

"Like I said, I don't have everything yet, so although there are Use of Force policies, there is not an emphasis on de-escalation within the policies,” he notes. This follows the finding by Vice News that the St. Louis Metropolitan Police Department leads the nation in the rate of police shootings, by a long shot.

Overall, he believes the policies are a window into the outlook of the department and its leadership. “The policies can tell you some things: are they forward looking, or not? Are they responding to the community, or not?”

Weeks hopes Gram will be a tool for activists and even elected officials. “Gram is about accountability,” Weeks says. “It is the responsibility of the legislators and the police department to pass legislation, enact policy, and to enforce laws in a manner that is accountable to all the communities. So how can St. Louis work together and learn from what other cities are doing to hold their legislators and police department accountable to the community?”

Gram will be looking to combine deep investigations with accountability projects. In addition to publishing the policies and manuals he’s received from the department, Weeks says he plans to publish stories through the organization and keep the public engaged in the project.

“But to be clear,” Weeks says, “knowing the policies is only one piece of accountability, and I think the public should be made aware of them.”