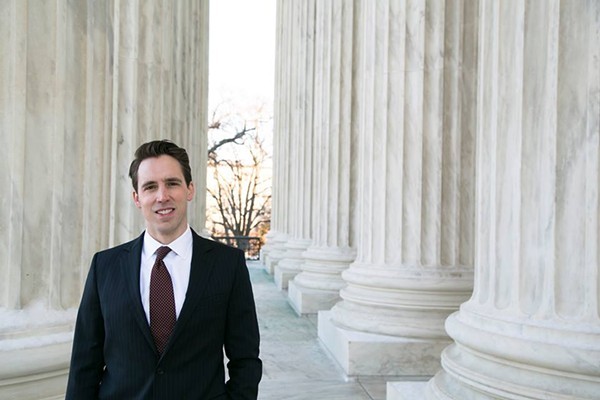 "It is time to address the root of the problem," Josh Hawley wrote. "Our society is increasingly devoid of moral values. Our children are no longer taught right and wrong. Until we return to basic moral principles, we will never see crime down."

Sound like a stump speech? Not quite. Missouri's Attorney General actually wrote that passage as a mere lad of fifteen. He may have used the phrase "our children," but he was basically a child himself.

The saying goes that a conservative is a liberal who's been mugged. But as Hawley's early dabbling in journalism demonstrates, some conservatives don't need the mugging. They come into the world sounding like Mitt Romney — and, even as teenagers, stand up straight in their suit and American flag pin. If rebellion fails to strike these poor souls in college, they're almost surely doomed to elected office.

So it appears to have been with Hawley, and what makes his youthful essays so fascinating isn't the journey they reveal. Quite the contrary. Instead, it's the revelation that John Danforth's protege had his patter down even before he got his driver's license.

The proof is in the newspaper clippings. Before Stanford and Yale Law School, the 38-year-old Great Hope of the Missouri GOP lived in tiny Lexington, Missouri, about an hour east of Kansas City. There he wrote a column for the Lexington News. He was still in high school, but somehow the column (titled "State of the Union," naturally) already sounded as if its author was positioning himself for a Senate run.

And while the reader may chuckle at his precociousness, it's eerie just how closely fifteen-year-old Hawley's soundbytes would be echoed by the 38-year-old Hawley in comments earlier this year on the subject of sex trafficking.

“We have a human trafficking crisis in our state and in this city and in our country because people are willing to purchase women, young women, and treat them like commodities," the Attorney General intoned from the pulpit. "There is a market for it. Why is there? Because our culture has completely lost its way. The sexual revolution has led to exploitation of women on a scale that we would never have imagined (emphasis added)."

You could give Hawley credit for consistency — or you could marvel at the way that two decades of life experience seem to have done nothing to change his worldview. I'd be mortified if anyone stumbled on the stuff I wrote in high school; Hawley was so adept in platitudes even then it's hard to imagine he'd disavow a word. And why should he? Sex trafficking, crime — who needs real-world solutions when you can blame society's ills on an undefined moral malaise?

The theme crops up again in his September 1994 Lexington News column, one we'll call "Dan Quayle Was Right."

"Two years ago, Dan Quayle was mocked, ridiculed," the teenaged Hawley writes. "... But two years later at the National Convention of Southern Baptists, Bill Clinton is giving speeches that closely resemble Quayle's famous [one on] Murphy Brown. What has happened in those two years? What could possibly account for the about-face? Perhaps it is spurred on by the fact that 72 percent of the American people think we're in moral decline."

Young Hawley, clearly, is among them.

"It will take great insight, understanding and courage to successfully lead this nation through the rough waters ahead," he writes. "Maybe we should be carefully listening for the leader who starts by saying something VERY unpopular because he believes in it and lives it, a man who takes the ridicule but doesn't back off. Perhaps that person is .... Dan Quayle."

— who are we kidding? There he continued to espouse the beliefs he'd espoused as a fifteen year old, only instead of doing it for a small-town Missouri newspaper, he did it in three columns for the Stanford Review.

The paper was founded by tech mogul Peter Thiel (who'd famously go on to destroy Gawker by subsidizing Hulk Hogan's lawsuit against it, as well as donate big bucks to Hawley). Its publication, which began more than a decade before Hawley enrolled at Stanford, was a reaction to the "Rainbow Agenda," a set of demands issued by minority students inspired by Jesse Jackson's Rainbow Coalition.

Hawley's columns, alas, are not as incendiary as the paper's origins might suggest. But at least they're not quite as boring as his high school pablum.

In one, the college sophomore gently ridicules presidential candidate Bill Bradley as "the docile hippie." In another, tied to the imminent departure of Stanford's president, he suggests "A New Speech for a New President." Hawley's grand idea for his university? The university should incorporate gender and multicultural studies into the curriculum of other departments. It's a clever way of suggesting we don't need women's studies — without actually calling for its abolition.

Oh, and maybe rethink affirmative action, suggests Stanford Hawley. "For too long we have treated our minority students as playthings — used them to make ourselves feel better and our institution appear compassionate and color-blind," he writes in the voice of the incoming, idealized president. "We must stop treating our minority students as ends to our reputation and start treating them as students, engaging them as students, and expecting of them as students. No less is acceptable. No less is just." It's as inspiring as Josh Hawley gets, until you stop to realize he's basically calling for a crackdown on students of color. (Continuing the theme of helping minority students by making their lives harder, he also suggests the university "review" theme housing, which allows students to "self-segregate by racial and ethnic group.")

But it's in his final Stanford Review column where Lexington locals would surely recognize their hometown boy made good. In it, once again, Young Hawley returns to his pet theme: the moral decline of a country he's hardly old enough to know.

"Surveys conducted at the close of the 1998 mid-term elections showed voting Americans' first concern was 'cultural decline,'" he writes. "Amidst school shootings, church burnings, JCC shootings and other random acts of heinous violence smeared across our cultural landscape, it is no wonder there exists a palpable sense that the nation suffers from a cultural malaise. America's core values and beliefs are under siege, some say."

Some say? He's hit the point frequently enough in his writing that it's almost certainly Hawley who says. But even as a college student, he's too careful for fire and brimstone — already more an ambitious young man buttering up to the old ones a la Marco Rubio than a let-her-rip Rush Limbaugh. Despite his youthful suggestion that we need a leader to take on unpopular ideas just like Dan Quayle, Hawley's calls to arms are generally bland.

And in that, they're just like the crusades he's taken on as state Attorney General. It's surely no coincidence that Hawley's most aggressive moves have been against "trafficking" and "Facebook" — two bugaboos no sensible person would be caught defending.

Indeed, the only time Hawley seems to directly take on policy in his youthful writings is a column about Medicaid. In his Lexington News column on the subject, he asserts, "We are not in a health-care crisis. We are in a health-cost crisis." But rather than make policy prescriptions that could come back to haunt him — repeal and replace Medicaid! Cap the wages of healthcare providers! — Young Hawley then concludes weakly with the suggestion that it will take real leaders (and responsible voters, by gum!) to address the problem.

"As voters it is our responsibility to elect capable leaders who are willing to face today's complex issues and provide competent answers," he finishes. "Opportunities for my generation are at stake, and the future of this nation hangs in the balance."

It seems churlish to call it a complete cop-out — the writer, let us not forget, was fifteen. But what's more than a bit dispiriting is that you could easily imagine 38-year-old Josh Hawley giving the exact same answer today.