With Town Hall, Students Hope to Build on March for Our Lives Success 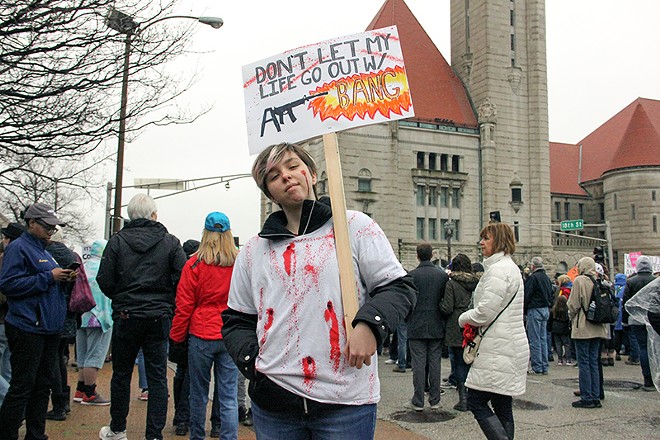 Two weeks after the anti-gun March For Our Lives drew thousands to the streets of downtown St. Louis, student organizers have started planning their next effort — a town hall meeting. The event will take place this Saturday, April 7 at Kirkwood Baptist Church (211 N. Woodlawn Avenue) as part of the National Town Hall Project.

Organizer Haley Zink estimates that 500 people will be in attendance. "We have a venue for 500. We wanted a venue for 1,000," she says. The event will take place from 6 to 9 p.m. and will include a student panel as well as a Q & A with elected officials.

Zink, a 21-year-old student at St. Charles Community College, is one of four students at the helm of the event. She describes her role as "the one that's making sure things are happening." Zink says she became involved in March For Our Lives St. Louis during the initial planning of the March 24 march, which was organized in response to the school shooting in Parkland, Florida, that left seventeen dead.

While several adults and professionals in the community are involved in the group, the majority of involvement and leadership comes from students, Zink says.

In fact, planning for the National Town Hall Project began after Parkland shooting survivor David Hogg sent out a tweet on March 25, urging supporters to organize town hall meetings in cities across the country. With support from allies, local officials, organizations including Moms Demand Action, and a grant from Everytown For Gun Safety, the students at March For Our Lives St. Louis were able to finalize a meeting in a little over a week.

The group has invited elected officials from both sides of the aisle, explaining that they won't endorse anyone based simply on party affiliation. They are more focused on the candidate's efforts towards gun reform.

Zink says they have yet to get confirmation from any elected official. Congressional candidates have been invited, as well as senators Roy Blunt and Claire McCaskill, Missouri Attorney General Josh Hawley, U.S. Representative Ann Wagner (R-Ballwin), and St. Louis Mayor Lyda Krewson.

However, exactly what kind of gun reform they are seeking is yet to be determined. Zink says the group supports banning bump stocks, raising the legal age to purchase a firearm, and other common-sense gun laws, but its primary goal is to raise awareness of the issue. "Gun violence in St. Louis is some of the worst in the nation," says Zink. "We're paying attention to Parkland, but what are we doing locally?"

And they want to make sure local elected representatives are listening. "The NRA is always there, always pressuring and that's what we have to do too," Zink explains.

Lending support to Black Lives Matter demonstrations, encouraging more people to vote, and educating constituents on candidates who support the NRA are all ways the group plans to make officials pay attention, along with this threat: "We will vote you out," says Zink.

On the night of the town hall, March For Our Lives St. Louis will provide buses for people traveling from downtown. The effect will also feature representatives from organizations like the Ethical Society of Police and YouthBuild, a nonprofit that works closely with children living in poverty.

Looking forward, the group has another walkout planned, as well as an art show being organized for the night of April 20. The art show which will feature art by inner-city youth. After covering costs, all proceeds will go back to the artists. Finally, a fundraising banquet is in the works for May, with more details to come shortly.