Judge Rules That St. Peters Couple Must Grow Grass They're Allergic To 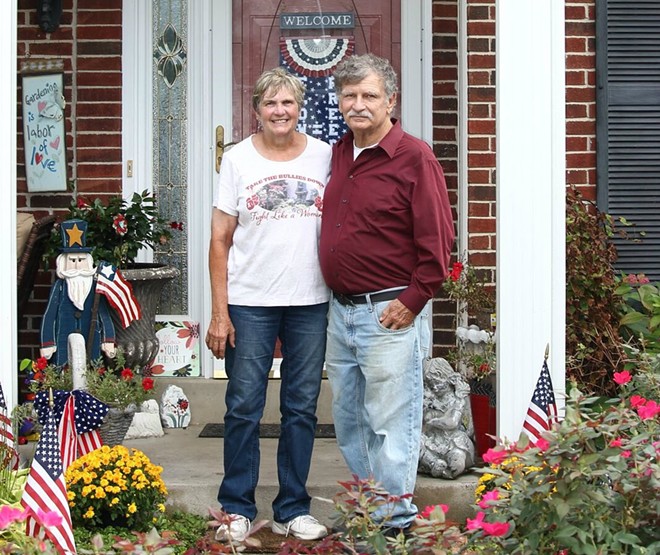 A federal judge in St. Louis ruled yesterday that Carl and Janice Duffner can be forced to plant turf grass in their yard — even though Janice Duffner has severe grass allergies.

If the Duffners fail to plant the grass, under the ruling, the city of St. Peters can sock them with fines that have potentially grown to well over $200,000 — or even have them sent to prison for several decades.

David Roland of the Freedom Center of Missouri, who is representing the Duffners, said the ordinance is so absurd, and the possible punishments so over-the-top, the case could ultimately end up with the U.S. Supreme Court.

Suffice it to say, he's appealing.

"It is so outrageous," he says. "This is a couple with health problems facing gross penalties for what they've chosen not to plant on their personal property. If ever there was a circumstance where the court should intervene, it would be these facts."

St. Peters passed an ordinance in the last decade requiring that homeowners cover at least 50 percent of their yard areas with turf grass. And that was a problem for the Duffners, who've owned their home in the well-heeled St. Louis suburb since 2002 — and, upon moving in, had planted a lush flower garden that contains no turf grass, thought it does have other ground cover.

In May 2014, the Duffners got a letter from the city saying their yard was not in compliance. The couple applied for a variance, and in July 2014, they were granted one.

However, it didn't give them a free pass; it still required them to plant at least five percent turf grass. Absent that, the St. Peters ordinances suggested, they would face fines of at least $10 a day, and potentially much, much more.

The couple refused — and, that September, filed a lawsuit.

The litigation has taken a long and torturous route. After the Duffners filed in state court, an adverse ruling sent them to appeals court, where they earned a partial victory. But the ruling sent the case back to the lower court. The Duffners chose to instead file in federal court in 2016.

Yesterday, U.S. District Court Judge John A. Ross issued a ruling that was mostly in favor of the city. He found that even if the facts as presented by the Duffners were true, it wasn't enough to win the case. And with that, he granted summary judgment for St. Peters.

Roland says there are some strategic benefits to Ross' decision, and said he's glad to have clarity, more than a year after St. Peters moved for summary judgment.

But, he says, the decision cannot be allowed to stand.

"My estimation is that this is one of the most important property rights cases in the country right now," he says, suggesting that advocacy groups that care about property rights will likely choose to join the Duffners' fight. "We're going to go all hands on deck."

Rather than prohibiting certain plants that might be harmful, Roland notes, St. Peters' ordinance instead forces homeowners to proactively plant others. "It's a huge leap conceptually, and that's why it's so dangerous," he says. "By this principle, a city could require you to put in a swimming pool and pay to maintain it. That's the same thing we're talking about here."