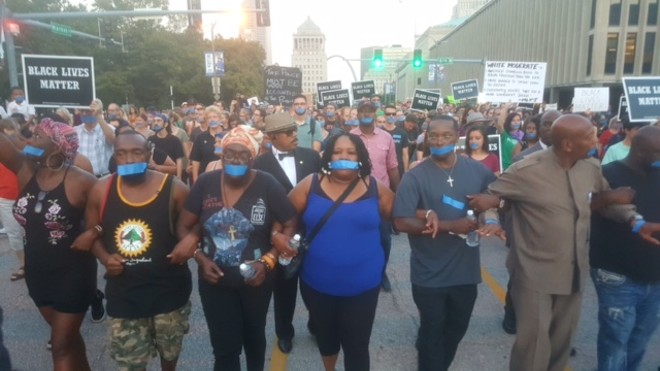 A federal judge on Tuesday cleared the way for Anthony Lamar Smith's survivors to investigate why they never got a key piece of evidence during settlement negotiations.

Smith was gunned down by then-St. Louis cop Jason Stockley following a car chase in December 2011.

During the civil suit that followed, Smith family attorney Al Watkins negotiated a $900,000 settlement. But he only learned later that he had done so without lab reports showing that Stockley's DNA — and not Smith's — had been found on a revolver purportedly discovered in Smith's car.

On Tuesday, U.S. District Judge Jean Hamilton convened a phone conference and reopened discovery in the case. Watkins says that gives him not only the power to get the missing evidence, but also to subpoena records or other evidence to find out why it wasn't provided five years ago.

"In this case, this was not simply about a bad case or somebody messed up," Watkins says. "This was the evidence in the case."

The DNA analysis was publicly revealed in 2016 when Stockley was charged with murder, and it later became a key component of prosecutors' case against him. Video and audio recordings of the deadly encounter had captured Stockley saying he was "going to kill this motherfucker" before he shot Smith, whom he suspected of dealing drugs, five times at close range.

But attorneys for the ex-cop had argued he was acting in self-defense because Smith was armed. They cited the handgun Stockley recovered from Smith's car in the aftermath of the shooting. That was thrown in to question by the DNA analysis, although Judge Timothy Wilson ultimately found it unconvincing. He acquitted Stockley in the criminal case, leading to months of protests.

Watkins says the evidence still would have been critical — and likely valuable — information in the civil suit negotiations. He says he now will advocate for a larger settlement for his client, Smith's young daughter, in part because that's the only recompense they have.

"I'm not doing this because I somehow want everyone to hold hands and sing Kumbya," he says.

An independent investigation conducted by Assistant U.S. Attorney Hal Goldsmith — then in private practice — found the evidence clearly should have been turned over but wasn't. Former assistant Attorney General Dana Redwing handled the case because the police department was under state control at the time.

Goldsmith says in his report that Redwing was clearly aware of the evidence, but he writes that he couldn't determine why she failed to hand it over. Watkins has theorized she did it intentionally to kneecap him in negotiations. He has sought sanctions against her.

Redwing has denied she intentionally withheld any evidence or acted inappropriately.