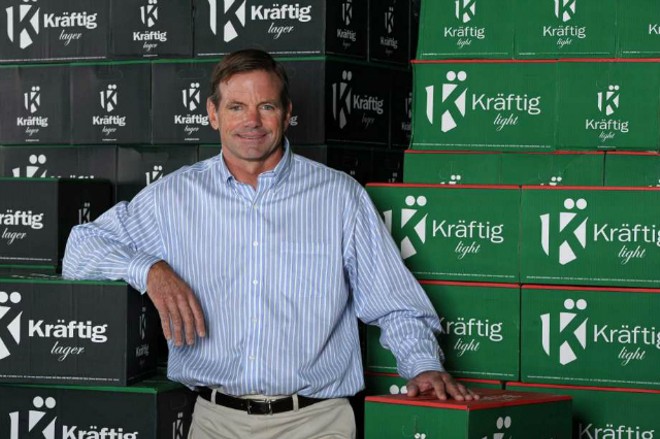 Editor's note 5:15 p.m. : This story was updated after publication with a statement from the family of the boy Billy Busch is accused of assaulting.

In a newly released recording, Billy Busch tells police he got little "aggressive" with a sixth-grader he is accused of assaulting.

The audio recording is of a December phone call between the Anheuser-Busch heir and a Creve Coeur detective. The Riverfront Times obtained it Tuesday through a Sunshine request.

Busch, 58, allegedly roughed up the eleven-year-old in November after the boy scuffled with Busch's son during a basketball tryout at Chaminade College Preparatory School. Police say video shows Busch grab the kid by the front of his shirt, drag him out of the gym and pin him against a wall. The boy was reportedly bloodied in the confrontation.

The boy's father pulled Busch off him, police say.

In the December phone call, Creve Coeur Detective Cory Mueller informs Busch he will be issued a summons for assault. Mueller, in full good-cop mode, assures him that the low-level municipal charge is roughly the same as a speeding ticket and advises him "don't stress out about this" before they hang up.

"Rest assured we're not going to treat it as some kind of gigantic ordeal," Mueller says.

Busch seems relieved. "That's great. A lot of people, because of the name and the situation, would try to blow something like this out of proportion."

Details of the assault charge remained quiet until the Riverfront Times obtained a copy of the police report last week through a Sunshine request.

Busch is the great grandson of Anheuser-Busch founder Adolphus Busch. After the company was sold in 2008, he launched his own, competing brand, Kräftig.

Toward the end of his conversation with Mueller, Busch volunteers to tell his side of the story, claiming his son was being bullied and he intervened. He admits he grabbed the sixth-grader by the shirt but says he was just trying to talking to him.

"He tried to walk by me, and I said, 'Let's talk about this and figure out why you would do such a thing,'" Busch tells Mueller. "And then he punched me in the face, and that's when, you know, I kind of got a little bit more aggressive."

The confrontation was recorded on video, according to the incident report. So far, police have refused to release the footage publicly, citing a number of juveniles who appear in the frame. In Mueller's report, he says the video shows Busch grab the boy's shirt front and start shoving him out of the gym. The boy does slap at Busch's head, but the detective describes it as a defensive maneuver as the kid tries to escape from his adult adversary.

The boy's father, Derek Falb, released a statement over the weekend disputing Busch's claims. He says the brewer's son instigated the scuffle and Busch had no cause to get physical with a kid.

As we previously stated, a video clearly shows Mr. Busch’s actions toward our 11 year old son were unconscionable. The prosecuting attorney for Creve Coeur also determined there is evidence to warrant prosecuting Mr. Busch for assault. We are not in possession of the video but welcome its public release.


A court appearance originally scheduled for Wednesday has been continued to May 2.

Here's the recording of Busch's call with Mueller. We've edited it to remove the boy's name.