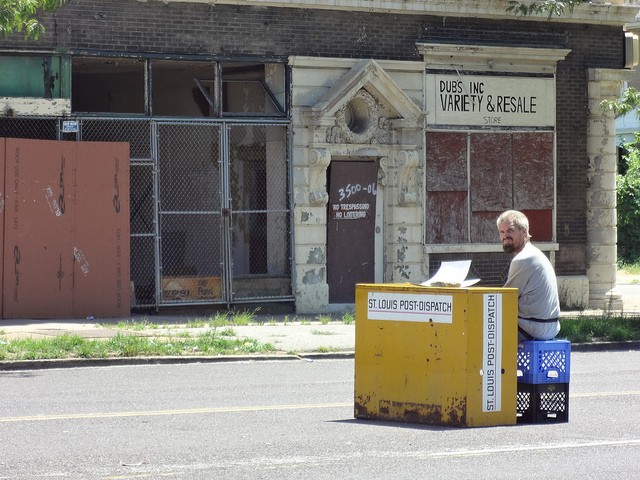 Last week, the St. Louis Post-Dispatch rolled out a new-and-improved version of its website — touting a way to visit stltoday.com without all the pop-up ads, questionnaires and videos that have earned it the ire of impatient digital readers.

But it was only this week that the reality began to set in for some long-time freeloaders: As of March 20, the newspaper also tightened up its paywall so that access is blocked after a certain number of stories.

And that doesn't just mean having to answer those silly survey questions from Google that have long allowed scofflaws free access the site. It means a full block. Those who don't pay up — 99 cents for the first month, and after that $10 monthly — get stopped at the headline.

Curiously, the newspaper's spokeswoman won't say what number triggers the full wall. Unlike the New York Times, which counts down its readers' ten free stories each month and then aggressively pushes digital subscriptions, or the Washington Post, which is frank about its twenty-story limit, the Post-Dispatch is keeping its terms vague.

And that's led to a bit of confusion, especially since the wall was seemingly erected without notice. Some readers have posted complaints on the newspaper's Facebook page; others have taken to Twitter.

Man, fucking brutal if so


Did @stltoday go completely behind a pay-wall? Every article/LTTE/OpEd I go to is blocked with a pop-up for the digital subscription. Not complaining, that's their right. Just can't find any info that it happened.


Based on our admittedly unscientific research, the Post-Dispatch paywall is set somewhere between the Times and the Post; we were able to click through to fourteen stories before triggering a demand to type in our password.

Instead of answering our questions about the limit, spokeswoman Tracy Rouch provided us a quotation from publisher Ray Farris, saying, "Our content is valuable online and in print. We’re encouraging our digital content consumers to subscribe for the best experience.”

The statement continued by explaining,

Additionally, all subscriptions include the e-replica edition of the St. Louis Post-Dispatch and membership to the Reader Rewards program.

The daily has experimented with a paywall in some form or another since April 2014. But it's never been as firm as, say, the Times — initially, it was only quote-unquote premium content behind the "stlEXTRA!" wall, which mostly seemed to translate to Bill McClellan's column. At some point, however, the premium package seems to have been quietly abandoned; in the recent years, even McClellan has been free to read, so long as you answer those survey questions.

And the latest trauma for cheapskates seems to be that the scaled-up wall is accompanied by a crackdown on ad blockers. Again, the paper wouldn't answer our specific questions about the change, but did confirm that as of March 8, "those who have an ad blocker in use can continue to read by allowing ads on STLtoday.com, logging in as a subscriber or starting a subscription." In other words: Those who have an ad blocker in place won't see Post-Dispatch content unless they pay up.

Naturally, some readers have suggested that it's their god-given right to enjoy free journalism — and any economic plan on the part of Lee Enterprises that requires they pay for it, or even passively view the content of its advertisers, is an insult.

guess I will never read @stltoday again...I will NOT allow ads to be shown on my screen and I will not buy a subscription! I will not be BULLIED by the press!!!


Stay strong, Sean. How dare that for-profit business ask you to contribute to its bottom line? How dare they!