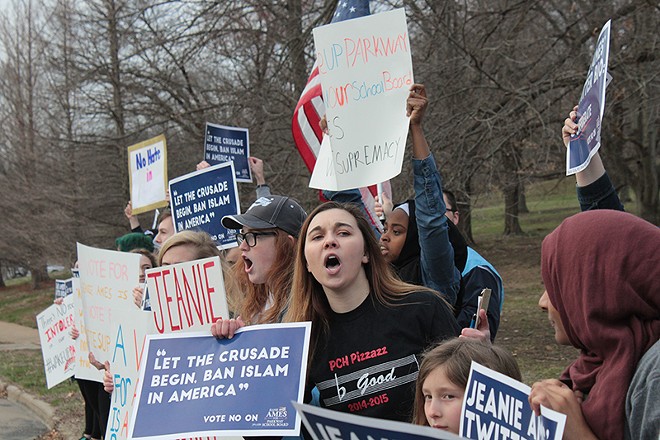 As a Parkway School Board candidate, Jeanie Ames' Twitter history and Trumpish rhetoric — her campaign slogan is "Make Parkway Great Again — has turned what is a normally low-key race into a regional controversy. Yesterday, during a candidate forum held at the Islamic Foundation of Greater St. Louis in Ballwin, Ames faced that controversy head-on.

"I really want to take an opportunity to say who I'm not," Ames said during her opening remarks. "I'm not xenophobic, homophobic, anti-Islam antisemitic or racist. I am so grateful for the opportunity tonight to answer any questions and put to rest the vile smear campaign that has been waged against me."

Ames would go on to expand on that explanation, though it's hard to say whether it convinced anyone in the audience. (More on that in just a bit.)

Some necessary background: Ames' campaign has been dogged by her social media history. Critics have circulated screenshots of past tweets they claim prove that Ames is a racist and unfit for the school board. And even today, in the bio of her personal Twitter, Ames self-identifies as a "Confederate" (in addition to a "Constitutionalist," "Free Market Capitalist" and other less incendiary descriptions).

Those tweets include a comparison of Michelle Obama to a "giant rat," a photo with accused friend of Nazis/former White House adviser Sebastian Gorka and a tweet cheering for alleged sexual abuser Roy Moore in his Senate campaign.

On Sunday, the audience's interest may have been most engaged by a particular retweet, one that showed a Crusader-era knight kneeling, sword in hand, with the words "Anti-Islam" superimposed over the knight in red. The image also contained a caption: "To be opposed to evil is to be opposed to Islam! Let the crusade begin! Ban Islam in America!" 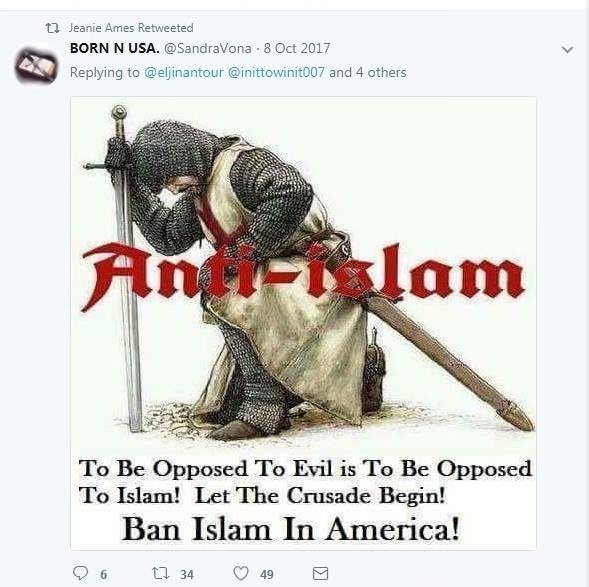 Generally, candidates for the Parkway School Board appear at one forum, hosted by the League of Women Voters. But that forum, held earlier this month, failed to touch on Ames' notions about the Confederacy and Islam.

Saad Amir, who attended the forum, tells RFT that he felt the event had missed an opportunity to acknowledge the controversy and deal openly with key issues in the race. The omission motivated him to organize a new candidate forum, which eventually found a home at the Islamic Foundation.

"We just wanted to give the candidates a chance to go out in front of the Muslim community, so they can make an informed decision on April 3," says Amir, who serves as executive director of the local non-profit Muslims for a Better America. Amir notes that the Parkway school district includes hundreds of Muslim families.

But when the time came for Ames to discuss her views on Islam — and the above tweet — the result was a convoluted narrative that, frankly, was hard to follow. She appeared to argue that the tweet was merely a component of a larger argument she was engaging in at the time, centering on Trump's immigration ban.

Here's a transcript of her remarks, which came in response to the question, "What are your views on Islamophobia and how do you relate that to the diverse Parkway community?" (Ames' remarks begin around the 49-minute mark of this Facebook Live recording of the forum.)


I think that it has been overwhelmingly misconstrued and overwhelmingly taken out of context that there is a picture from my Twitter page with a knight of Templar on it, and I want to explain why that is the case.

My degree in political science has a focus in Middle Eastern studies…. and many of the people I studied with had an ongoing debate. We literally were discussing, it was October of 2017, and we were discussing how the president Trump travel ban was or was not a ban on Muslims, and how it related to the 1924 immigration law that turned into the 1952 immigration law. There were several people discussing this over several days that agreed that yes, there was some law that agreed on banning Muslims.

The point I was making with that, as a retweet, was — if they had taken any other statement I had made — an argument against that. If you read those two laws, and you read the travel ban, none of those apply at all. It was completely taken out of content.

My love of anything political or international studies, I am drawn to that, and I love engaging in that dialogue. And it gets me into trouble sometimes, as it does now. But it in no way was a reflection of any Islamophobia at all. In fact it was just he opposite, and it was taken out of context, and context is huge.

I'm not making excuses for myself, I'm stating facts and truth. I've had that discussion with personally, and I have welcomed and I'm grateful for the opportunity to explain it here tonight.

Ames' explanation — which didn't actually explain the content of the tweet —  didn't appear to go over well. According to the St. Louis Post-Dispatch, Council on American-Islamic Relations of Missouri executive director Faizan Syed approached Ames after the forum to ask her to apologize for the tweet. She refused, the paper says.

After the forum, around 30 protesters — including some Parkway students and parents — gathered across the street from the mosque. Some held signs calling Ames a white supremacist and a bigot, while other signs featured quotes from the anti-Islam tweet.

One of the protest's organizers, a former Parkway student named Jack Seigel, told RFT last week that Ames' right to run for office doesn't mean she should be immune from criticism. He explained that he hopes to one day "live in a world where, if you choose a morally repugnant and intolerant belief system, you do not have the ability to be elected to office."

He clarified, "Not because a law prevents you from placing your name on the ballot, but because we have created a society that is so vigilant against white supremacy that a confederate would never be a viable candidate. We clearly have a lot of work to do."