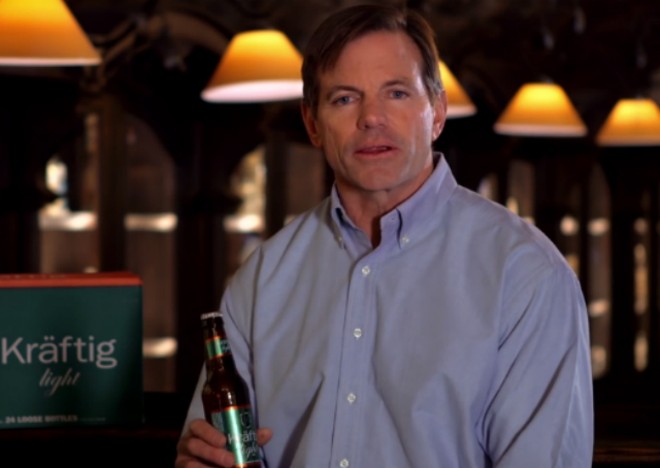 Update: 4:30 p.m. Saturday — Statements from Billy Busch's attorney and the father of the boy he is accused of assaulting have been attached to the bottom of the story.


The 58-year-old Busch bloodied the boy's nose, dragged him by the front of his shirt and pinned him against a wall before the boy's father pulled him off, according to police reports obtained by the Riverfront Times through a Sunshine request.

Busch is due to appear Wednesday in Creve Coeur municipal court.

The incident began in November 2017 when the boy and Busch's son scuffled in line during a basketball practice at Chaminade College Preparatory School in Creve Coeur.

Busch, who is listed at six feet tall and 195 pounds, raced over to intervene. The boy, whom we are not identifying, later told police Busch swore at him.

"You fucker!" Busch allegedly said. "What do you fucking think you're fucking doing to my fucking kid?"

Busch grabbed his young adversary by his shirt and started shoving him backward, the boy told police. The boy says he slapped the beer heir on the temple and tried to backpedal away from him, but Busch kept coming and held him by his collar.

The police report says, "Mr. Busch pushed [the boy] into a wall at the base of a stairwell resulting in [the boy] hitting the back of his head against the wall. At that time, [the boy's] nose began to bleed."

Another adult alerted the boy's father who, along with at least one basketball coach, intervened. The coach kicked Busch out of the gym.

At first, the boy's family was hesitant to pursue charges in the case. Creve Coeur police were notified after the school contacted authorities. The boy's family told investigators they had little faith in the justice system and were especially skeptical given Busch's social status. (Editor's note: The boy's father contacted the RFT after publication to say his wife has faith in the justice system — just not in Busch being held accountable.)

However, they agreed to give statements and ultimately gave police the go ahead to charge Busch. The school provided surveillance footage of the altercation to police in mid-December. In the report, police describe video showing the two boys shoving and trying to slap each other after arguing over who was in front in the line.

"Busch is seen grabbing [the boy] once more and forcing him backwards out of the gymnasium into the lobby," the report says. "At this point, [the boy] appears to take a swing at Busch in an effort to get away. Busch is seen pushing [the boy] backwards and pinning him against a wall."

Police contacted Busch, who gave them his version before hanging up to talk to his attorney, according to the report. He says he saw the boy punch his son and recalls saying something like, "Hey, what are ya doin? You can't do that sort of thing; it's bullying." Busch told police the boy mouthed off to him and then tried to hit him.

"Busch said this made him become aggressive and he said he became a bit angry," police say in the report.

Police tried to get Busch to come in and give a statement, but they were later told by his attorney that wasn't going to happen. Police then mailed him a summons for simple assault.

Top defense attorney Scott Rosenblum is now representing Busch, court records show, although he's not the attorney who initially rebuffed police. Rosenblum couldn't immediately be reached for comment on Friday. A call to Busch's cell phone went straight to voicemail, and he did not respond by press time.

Busch is an heir to the Anheuser Busch fortune. After the mega-brewer was sold to Belgium-based InBev, he founded his own St. Louis-based beer company, Kräftig, with dreams of turning it into a national powerhouse. He is the face of the new brewery, appearing in commercials dressed in button-down shirts as he pitches his new beer as a worthy successor to his family legacy.

His image in the commercials is that of a mild-mannered corporate bigwig, but he was once seen as one of the Busch family bad boys. Busch bit off another man's earlobe in 1981 during a bar brawl that reportedly began when he was accused of cheating in an arm-wrestling match. He ultimately wasn't charged because authorities said the other man started the fight, according to press reports at the time.

He was found not guilty of assault the next year when he allegedly reached through the drive-thru window at the old Naugles in Fenton to punch a worker in the throat. A judge found that prosecutors hadn't proved the worker was injured.

"Mr. Busch was unfortunately confronted last November with a situation where his son was bullied — actually sucker-punched — by a much larger middle school student directly in front of him during a school basketball practice. School personnel failed to react, so he did what every parent would have done in that situation. The school's video of the event clearly shows that Mr. Busch did not act with any maliciousness, and that his actions were directed at protecting the safety of his son and others involved."

And here's the response by Derek Falb, father of the eleven-year-old boy allegedly assaulted by Busch.

While we initially did not want to comment on the situation and keep a low profile, Mr. Busch’s statement, written by his lawyer, Mr. Rosenblum, requires a response.

While the statement is eloquently written, we are well aware that Mr. Rosenblum is paid to defend Mr. Busch and attempt to repair his public image using tired legal maneuvers. However, the statement is inaccurate for several reasons.

First, the statement attempts to paint a grown man with a history of erratic behavior (such as biting a man’s ear off) who physically assaulted an 11 year old boy as a sympathetic figure.

Second, it attempts to paint the victim as a bully when it was Mr. Busch’s son who was the initial aggressor in the incident between the two boys. It just so happens in this instance, Mr. Busch’s son instigated an altercation with another middle schooler of his same age and grade level who defended himself. While Mr. Busch may not have liked seeing his son receive a dose of his own medicine, him attempting to resolve his son’s conflict with another 11 year old boy, let alone physically, is shameful. When the victim's father pulled Mr. Busch off his son and confronted him, Mr. Busch’s behavior changed dramatically and he was clearly more comfortable addressing an 11 year old boy than another grown man.

Third, it suggests the school failed to react. In fact, the school administration and basketball program acted swiftly and decisively in calming the situation, investigating what happened and removing Mr. Busch and his son from the facility. The school’s response could not have been better.

In summary, Mr. Busch's behavior was highly inappropriate. For Mr. Rosenblum to excuse Mr. Busch’s behavior as without malice and as something any father would do is ridiculous. The actions and language used by Mr. Busch during the incident and as documented on the school’s video clearly and incontrovertibly show otherwise. The fact is a grown man manhandled a child in response to an altercation his son initiated but could not finish. We have no ill will toward Mr. Busch's son and wish him the best.

We do not intend to sue Mr. Busch in civil court for his actions. However, we plan to cooperate with and monitor the indefensible prosecution of Mr. Busch by the people of Creve Coeur and St. Louis.