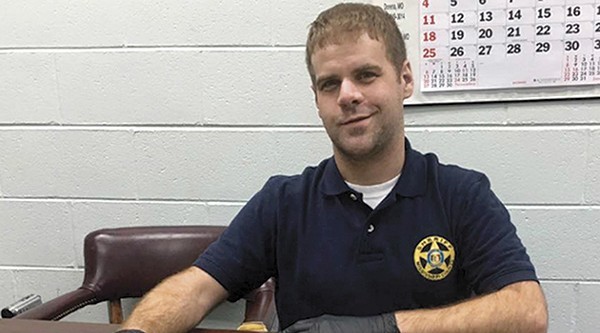 And if that all sounds a bit familiar, well, it might be. Hutcheson was indicted in April 2017, after just four months on the job, for a host of state-level charges, including one alleging he'd roughed up a 77-year-old hairdresser and then filed charges accusing her of kidnapping his sister-in-law. All told, he was facing eighteen counts in the case brought by the Missouri Attorney General.

The state-level indictment had indicated that the FBI opened a case against Hutcheson as early as 2014 — and sure enough, the new charges refer to actions that took place then, back when Hutcheson was still a deputy. However, the indictment suggests the behavior continued until March 2017, just one month before the state indictment.

The federal charges piggyback on the state one alleging that Hutcheson illegally tracked the phones of state troopers, then-sheriff Keith Moore and a judge who presides over Mississippi County and neighboring Scott County, adding identity theft charges that appear to reference those people as victims. (In the federal indictment, the victims are identified only by their initials.)

The RFT's Doyle Murphy wrote this about the allegations in 2016:

FBI agents visited the sheriff's office in 2014 and took Hutcheson's computer,  Moore says. The former sheriff says he is not sure how the investigation began, but he soon learned they suspected the deputy was illegally tracking cell phones, including one belonging to Moore. Court documents signed by Attorney General Hawley accuse Hutcheson of using a technique called "pinging," which uses a phone's GPS to determine its location. The then-deputy was allegedly keeping tabs on Moore, five state troopers and Judge David Dolan.

Police sometimes need to ping cell phones in a hurry to find a kidnapped child or head off a crisis, such as a bombing, and the U.S. Supreme Court has allowed for them to do so without warrants. But authorities say this was not one of those emergency situations. Hutcheson allegedly still bypassed the warrant process. He is accused of slipping into the computer interface of a call service used by the sheriff's office and filing false affidavits to persuade the service to turn over off-limits GPS coordinates that told him the location of the phones — and by extension, the phones' owners.

It is not clear why Hutcheson would want to know the locations. A highway patrol corporal who picked up the investigation from the FBI gave no explanation in court filings of the former deputy's possible motives. Judge Dolan refuses to discuss the case.

If found guilty on the new charges, Hutcheson could face up to five years in prison on each count, plus a fine totaling up to $250,000.

In the release, United States Attorney Jeff Jensen stated, “This office will prosecute people who violate federal law regardless of their positions.”

Hutcheson is set to go to trial on the state charges on April 2. Assault charges related to his treatment of the 77-year-old were dropped last year, but other charges believed to be still pending included first-degree robbery, seven counts of forgery, another seven counts of tampering with computer data and one count of notary misconduct. (Court records are no longer available online due to the proximity of the trial date.)

After Hutcheson's indictment, he continued to report to work — and was in fact in the jail on the day in May when a Tennessee man, Tory Sanders, made a wrong turn and found himself lost in Missouri. Sanders called the police seeking help, but somehow ended up in an altercation with a number of deputies at the Mississippi County Detention Center. Hutcheson, according to Attorney General Hawley, led a group of six staffers as they stormed into Sanders cell. Within an hour, Sanders was dead.

Only then was Hutcheson removed from his duties as sheriff.