Mark Osmack Is Running for Congress, and You Should Take Him Seriously 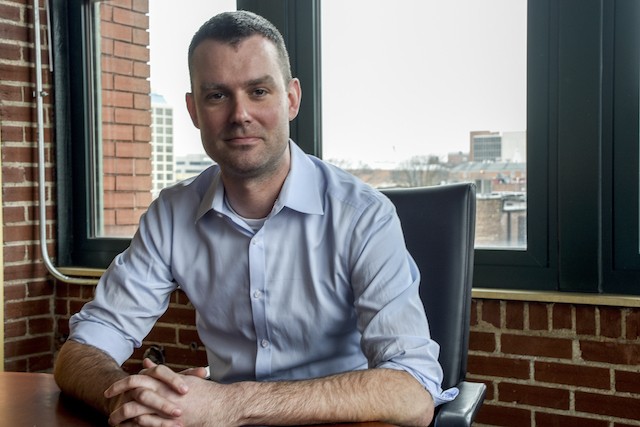 Mark Osmack is the kind of candidate that Democratic strategists dream of: a guy with blue-collar roots (lived in a double-wide as a kid), an Army veteran who did two tours in Afghanistan, a St. Louis County native who just so happened to grow up in a district that is suddenly, and decidedly, in play. Oh, and he's also an unabashed progressive — one who can speak persuasively about his beliefs to the guys he grew up with in Fenton.

There's only one problem. Mark Osmack is not a lawyer at a white-shoe law firm.

In fact, Mark Osmack is not a lawyer at all. Before he enlisted, before the G.I. bill paid for his master's in public administration, he was an English literature major at Mizzou, one who can confidently discuss the work of Tim O'Brien — surely a quality we need more of in our elected representatives. But in St. Louis, and in many metro areas like it, to raise the kind of money that proves you're a viable candidate for office, you need Big Law connections.

The problem is not, Osmack hastens to explain, that he can't raise money. He's taken in $43,000 so far, and should he win the primary and get to represent Democrats in their quest to un-elect U.S. Representative Ann Wagner (R-Ballwin), he presumes he could raise a lot more.

But Osmack's chief rival in the primary, Cort VanOstran, has raised six times that — $343,000. VanOstran, who went to Harvard for undergrad and Washington University for law school, has been able to tap into the Big Law network and raise so much money that it tends to generate more money. And that tends to get a guy some attention.

I'm personally guilty of just that. A few weeks ago, I wrote a quick newsy piece about Wagner's sudden vulnerability. A Democratic upset in a statehouse special election inside Wagner's district had caught my attention, followed by the Cook Report declaring that Wagner's race was shifting to favor Democrats.

In my piece, I called VanOstran "the frontrunner" among Wagner's opponents and quoted the Cook Report's tally of his fundraising success. That kind of free media reverberates; VanOstran was then able to use our shot-out in a fundraising email. Money begets money.

Osmack, 36, is tired of that. He called me up after my tossed-off blog post, not to argue so much as to remind me the race isn't always to the rich.

"It's not about money," he says. "If it was about money, Jon Ossoff would have won in Georgia's 6th district. That was the most expensive House race in history," as the Democrats flooded the district with more than $23 million. It wasn't enough to ensure victory. "He got walloped," Osmack reminds me. "It wasn't even close."

Osmack is a reasonable guy; he gets that primary voters want to support someone who can win in the general, and understands that armchair analysts like me to tend to equate dollars with viability. But he argues that beating Wagner is less about being able to tap into millions of dollars and more about being the right candidate: Someone who grew up in the district (he says this pointedly, as VanOstran did not); someone who can talk persuasively about the issues that matter to voters.

I test him out a little bit. Can he talk about guns? He sure can; he's fired them. He was even carjacked in the Central West End last year (sooo St. Louis). He easily explains exactly why having a gun wouldn't have helped him in that incident — in fact, he argues, it would have resulted either in his murder or his assailant driving off with yet another gun. He volunteers that he's not afraid to talk about racial inequity, the elephant in the room for many county voters. He also wants us to leave Afghanistan. Look at his website, he urges me; he knows exactly where he stands and he's ready to sell voters on it. "I don't speak in platitudes," he says. He's right.

The other major contender in the Democratic primary race, Kelli Dunaway, dropped out in December. In an exit interview with Daily Kos, she too blasted the perception that you can only be treated as a viable candidate by raising hundreds of thousands of dollars. “The system is set up so that only two kinds of people can successfully run for office: People who are wealthy, or people who are retired. There’s no place for a single mom," she said.

Osmack says Dunaway has become a good friend, and he's saddened by her conclusion. "If I didn't join the Army, I wouldn't be talking to you right now," he says. Still an Army reservist, he says, "I've been living off my savings for seven months. If I had a wife or kids, this is a no-go." And how is that a good thing? No wonder Congress seems so disconnected from our concerns — only the wealthy or childless need apply.

Now, it's unfair to paint VanOstran as a rich kid. He grew up in Joplin, son of a single mom — and you have to be extraordinarily capable to go from Joplin and a single mom to Harvard. He too has positions on his website, and voters should give them a good look. All Mark Osmack is asking is that we hear him out, too, and not just let money steer us toward what looks like a sure thing.

In the mean time, Osmack keeps making his own fundraising calls by day, and by night he tries to figure out where the voters will be. "I go to every single meeting, every single night," he says. "Labor stuff, women's groups, Democratic committees, everything." Maybe, he figures, they'll listen to his message — even if the Democratic Congressional Campaign Committee just wants to know his contribution totals.

And on weekends, he knocks on doors. He's not just going to the parts of the district that he's called home, Fenton and south county, and his home today, Creve Coeur. "I look forward to going to places where I think there will be pushback," he says. "I'm going to Chesterfield and Ballwin, and I want to talk about gun reform, talk about race."

You won't see the famously elusive Ann Wagner doing that, even though those wealthy suburbs are ostensibly her strongholds. And that, not money, is the reason Missouri's 2nd congressional district is in play — and why Mark Osmack wants to be the guy who sends her to retirement.

Editor's note: A previous version of this story referred imprecisely to the Cook Political Report's update on the 2nd District race. We regret the error.

Sarah Fenske is the editor in chief of the Riverfront Times. Follow her on Twitter @sarahfenske and email her at sarah.fenske@riverfronttimes.com