It's Wild Out Here in These St. Louis Streets 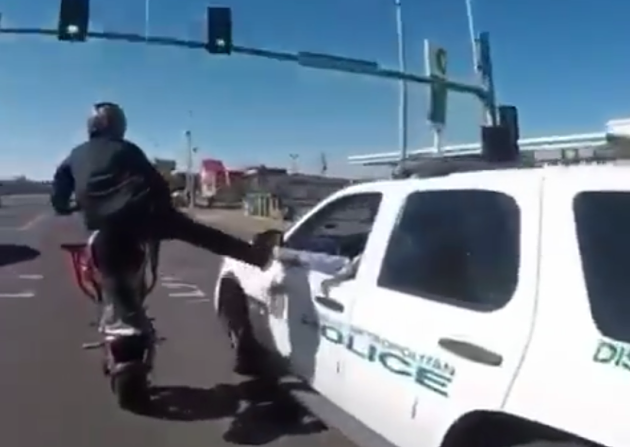 A viral video making the rounds on social media today offers compelling evidence that shit is indeed wild on these St. Louis streets.

Initially posted on Sunday evening, the video is filmed from the helmet camera of someone on a motorcycle, and it shows a second man riding very close to a St. Louis Metropolitan Police Department vehicle while standing on his bike and executing a wheelie.

The officer, who is decidedly chill (or perhaps simply aware that the chances of catching one of these hyper-fast bikes while driving an SUV are slim to none) puts his arm out the window and makes a fist. The motorcycle rider draws in close as he rides, then sticks his leg out as the officer fist-bumps his foot (yes, really).

The man on the motorcycle, who is an obvious maniac, showboats a bit more, staying in wheelie mode as he kicks his legs up in the air in front and leans back, holding himself up with the bike's handlebars. The officer meanwhile stays in his lane and maintains his speed, seemingly unconcerned about this lunatic's assuredly impending serious injuries. The video cuts off there.

The exact circumstances surrounding this glorious piece of film remain a mystery, but one thing is crystal clear: St. Louis stays wild, y'all.