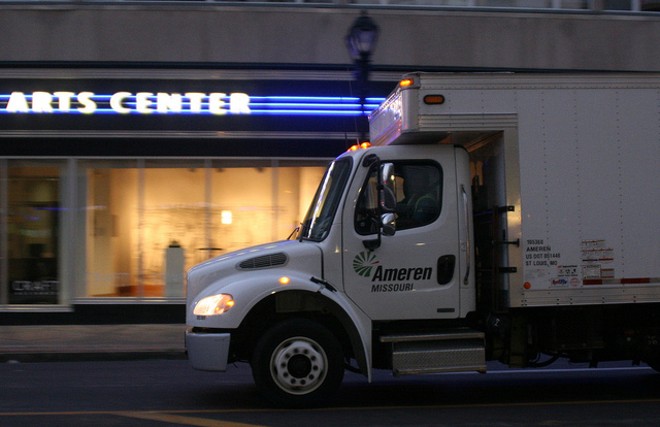 In early February, a handful of state senators spent more than 24 hours on a filibuster to jam up a bill that large utility companies want badly.

The proposed legislation — Senate Bill 564 — is designed to make it easier and faster for power providers, such as Ameren, to set new electricity rates. The companies have for years pushed various versions of the bill, spending hundreds of thousands of dollars on campaign donations and employing scores of lobbyists.

They now seem to be edging closer. The filibuster ultimately collapsed when the small, bipartisan band of opponents finally yielded, gaining in return at least a few changes to a bill they see as a cash grab that will hurt Missourians.

The House of Representatives could now act on the legislation, but it also has its own version, House Bill 2265. Sponsored by Representative T.J. Berry (R-Kearney), it passed through the Utilities Committee on Wednesday night by a vote of 10-2.

Rep. Tracy McCreery (D-St. Louis) is the ranking minority party member of the committee and voted no along with Andrew McDaniel, a Republican from a blue-collar district deep in the Bootheel.

McCreery says one of her concerns is the effort in both versions of the bill to speed up the process for hiking rates. The current process forces rate increases to slowly work their way past the scrutiny of the state Public Service Commission. It delays companies that would rather bump up rates quickly as a way of recouping money spent on capital expenses.

The delays, called "regulatory lag," act as a check on the companies, McCreery says.

"Regulatory lag is one thing that keep monopolies from going crazy with spending," she says.

Sen. Rob Schaaf (R-St. Joseph) penned an op-ed after the failed filibuster, highlighting reasons a utility company might want to spend more money faster: It's one way they make money.

"If you could earn a 9.54 percent annual return on capital spending, like the monopoly utilities can, wouldn't you spend as much as you could?" Schaaf asks in his piece, published by the St. Louis Post-Dispatch. "Ameren must find new ways to invest money to keep profits up, so it plans to spend $1 billion on which it can earn that return, and projects that it will spend another $1 billion or more if the House passes SB 564. Are you excited to pay higher rates so Ameren can earn returns on all that?"

Ameren has argued it needs the bill to invest in badly needed upgrades — as much as $200 million in annual infrastructure improvements. After the proposal passed the Senate, Ameren Vice President of External Affairs and Communications Warren Wood issued a statement to reporters:

"The Missouri Senate came together today to give initial approval to rate cap legislation that builds Missouri’s energy future by focusing on three key customer points. Customers want electric rates that are more stable and predictable, they want a secure grid, and they want a smarter grid that is more resilient."

The company is pushing hard for the bill. The Missouri Ethics Commission lists 49 lobbyists for the company. And Ameren has continued to hammer the three-pronged message of increasing the safety, security and stability through a public relations campaign, called POWERforward Missouri. Supporters also point to a 2.85 percent cap (negotiated down from 3 percent during the Senate filibuster) on rate increases and say grid improvements will create jobs.

Cara Spencer, executive director of the Consumer Council of Missouri (as well as a St. Louis alderwoman), says the cap has so many exceptions it's "meaningless." The Consumer Council has calculated that some of the largest industrial utility customers could qualify for discounts of as much as 40 percent, shifting the burden to those who can least afford it.

As for the proposed upgrades, she notes there is nothing in the bill that would compel Ameren to make any improvements or create any jobs.

"There's no teeth to it," Spencer says. "They don't have to do a dollar more. It's a promise they gave us verbally. It's not in the bill."

The Consumer Council also takes issue with a new accounting system proposed in the bill. In a letter to lawmakers, the organization says the complex new system would allow utilities to count past spending in their current costs as a way of building extra profits into the rates.

AARP Missouri is also opposing the legislation. In a statement, the organization warns that rising utility bills can "destroy a person's life savings."

"This legislation would allow monopoly utilities to raise rates faster, every year, with limited oversight by the Public Service Commission, and allow them to defer costs above the revenue cap included in the legislation to five years in the future — raising rates even higher," the AARP says. "The legislation also allows monopoly utilities to raise rates even higher on residential customers than the 'cap' by shifting costs from larger, industrial consumers onto our members’ rates."

The House version of the bill is set to go to the Rules Committee next and could reach the full membership within a few weeks.