St. Louis Pet Expo Plots Its Return — But Gets an 'F' From Better Business Bureau 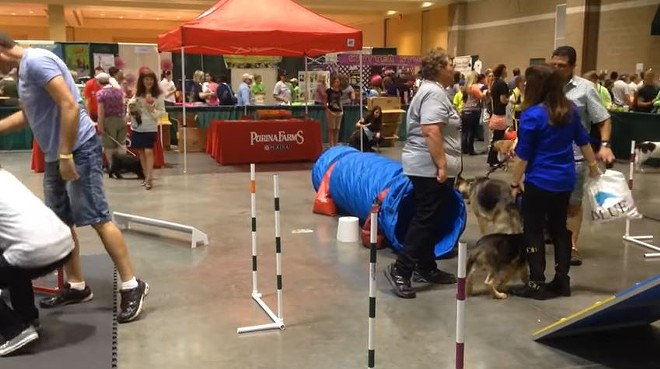 For the St. Louis-based event company Amazing Pet Expos, 2017 was a catastrophe.

Over the course of the year, a dozen pet events it had scheduled in cities nationwide were unceremoniously cancelled. In some cases — such as the ninth annual St. Louis Pet Expo, planned for late October — that cancellation came abruptly, with just a few days notice, amid confusion and contradictory messages between the venue and organizer.

But the company, which married couple William Bryan Rilenge and Sheila Rilenge have operated since 2009, appears to be trying to turn things around this year. Last week, the company posted the details for a rescheduled St. Louis Pet Expo to take place November 10-11 at the the Family Arena St. Charles.

In years past, at this point vendors and pet rescue groups would begin to plan their booths and pay their fees without a second thought. But 2017 is likely still fresh in the minds of the people who felt burned by the Rilenges. Last week, one day before the St. Louis Pet Expo announced its makeup date, the Better Business Bureau blasted out a warning to possible vendors. And it's not clear whether the Family Arena actually has a booking for the November date (more on that in a minute).

In its report, the BBB urged vendors to be wary of last-minute cancellations, followed by slow or nonexistent refunds. The past year's issues contributed to the BBB slapping Amazing Pet Expos — also known as AE Group, LLC — with an "F" rating.

According to the report, the BBB has received more than 30 complaints about Amazing Pet Expos in the past three years, with 2017 proving exceptionally complaint-worthy. A total of twelve expos were cancelled last year.

By September, the cancellations had become a news item — and a painful financial hit for some local businesses. While expos draw thousands of animal lovers, the events are hugely important for animal rescue groups and small vendors who spend months preparing and advertising. When those sunk costs evaporated with the expos, vendors publicly blasted the company for taking their money and allegedly playing games with promised refunds and cancellations. Some vendors accused the Rilenges of fraud.

As previously reported in the RFT, the Rilenges didn't take kindly to those allegations, and it sent at least one cease-and-desist letter. In a lengthy statement released in October, the company claimed that it had been the victim of "a very unfortunate series of events" involving a disgruntled accountant who had allegedly become convinced that William Bryan Rilenge, then COO of the company, was an agent of Satan. The unhinged accountant, the company said at the time, had sabotaged company records and deleted financial data.

Meanwhile, the St. Charles Convention Center, where the St. Louis Pet Expo was set to open its doors on October 28, stated tersely that the event was cancelled due to "unmet contractual obligations."

That same month, the BBB sent a letter to Amazing Pet Expo detailing the complaints it had received, particularly from vendors who had suffered last-minute cancellations and no refunds.

In response, the BBB report notes that it heard back from William Bryan Rilenge, who this year took over as CEO/president, replacing his wife. He claimed that he was instituting new policies to keep this year's slate of events from falling apart once again.

"I am overseeing all the customer service and have implemented a service standard. In addition, we will not register vendors for any event where there is not a countersigned contract," he wrote to the BBB.

In his communication with the BBB, the company's new CEO had plenty of excuses for last year's cancellations — including "natural disasters, billing disputes and low vendor registrations," in addition to the disgruntled employee who thought the company was being run by the antichrist — but he was also remarkably blunt in assessing the company's own responsibility.

That point was supported by a January 18 denial letter sent to vendors who who had tried to contact Amazing Pet Expos' insurance company in hopes of obtaining compensation for a cancelled Chicago event.

According to the letter, the BBB reports, the insurance company investigators concluded: "It does appear that [Amazing Pet Expos] has suffered from ongoing financial problems, which is consistent with a pattern and practice of nonpayment of bills, and cancellations of venues that [Amazing Pet Expos] scheduled, advertised, and sold booth space for despite not having the ability to bring the actual expos to completion, and knowing that it had not completed or filled its contractual obligations to cause those expos."

Indeed, it's not clear how the company will dig itself out of the hole that was 2017. In an interview with Riverfront Times, Rebecca Phoenix, the BBB investigator who authored last week's report, said that the company's stated attempts to right its course are promising, but the results remain uneven.

"There are still consumers waiting to see that happen," she says of the company's commitments.

Some vendors have waited for more than a year for refunds. One vendor even booked booths at three different conventions — and all three were cancelled.

"It’s not just the booth fees," stresses Phoenix. "A lot of these people travel, they print up dated material to promote the event. Many of them are newer businesses, and they just don’t have a lot of leeway to absorb those kinds of things. So spending months, or even years waiting for a refund is something that can make or break some of these small businesses."

RFT reached out repeatedly to the Family Arena St. Charles to confirm that the St. Louis Pet Expo's rescheduled November 10 event is, in fact, a go. On Friday, a staffer told us the event is not on the arena's calendar — and in fact,  the arena's website does not currently list the event on its online calendar. She suggested, however, that we call back on Saturday and talk to a booking manager.

There was no booking manager available on Saturday. And a different staffer, after talking to a supervisor, said she thought it was on the schedule. Still, she urged us to check back on Monday.

This morning, we called a third time. A staffer there checked with a colleague, then reported that they have "no information" about the expo coming in November.