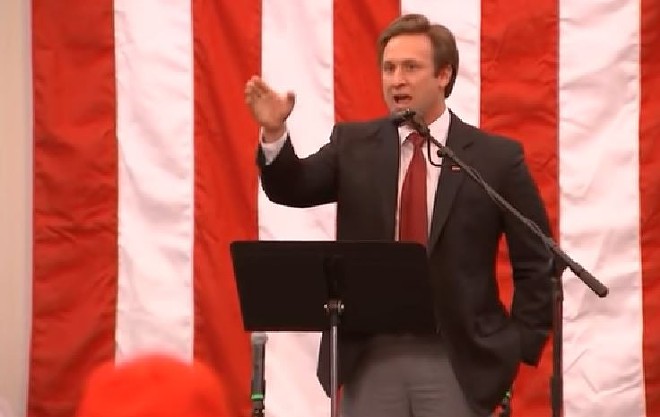 Even before Courtland Sykes' U.S. Senate campaign made national news with his opposition to feminists — those "career-obsessed banshees" who don't know a lick about bringing a man his dinner promptly at 6 p.m. — he was all about Roy Moore.

Yes, that Roy Moore, the former judge and Alabama Republican who was accused of sexual misconduct by multiple women when they were teens, and amid the resulting controversy lost a U.S. Senate race to a Democrat in the reddest state in the country.

Politically, Moore is about as toxic as a radioactive trash fire. But not to Sykes, who stated today that it is a "great honor" to receive an endorsement from Moore, "one of America's most courageous and legendary conservative figures."
You have to wonder how U.S. Senator Claire McCaskill (D-Missouri) always seem to draw challengers like this — first Todd Akin, and now Sykes, the only politician in the country eagerly embracing an accused child molester.

Sykes, who is quite possibly playing the most sophisticated piece of political theater in modern American history, has repeatedly touted his support of Moore, even going as far as traveling to Alabama in December to volunteer with the Moore campaign while nabbing photo-ops with a man who steadfastly denied and deflected the mounting allegations of his past abuses.

And the disgraced former candidate returned the favor. In Moore's endorsement letter — which comes on letterhead bearing images of a judge's gavel and the Ten Commandments — the former judge called Sykes "a man of vision and principle who will make a real difference in the United States Senate," and adding, "Courtland is a man of impeccable character, courage, and Christian faith."

The letter, which you can read in full below, concludes, "If you are tired of special interest politicians and liberal news organizations who seek to control us with 'fake news,' then I ask you to vote for Courtland Sykes in the upcoming election for United States Senate."

It's worth emphasizing that whether you think Sykes is serious or not, his campaign — which has raised a paltry $14,000, mostly from a loan he gave himself — is clearly patterned around the brash, media-bashing models of Moore and Donald Trump. Sykes describes himself as a "MAGA candidate," champions Trumpian policies and attempts to deploy political memes. (Dank they are not.)

And judging on effort alone, the campaign's most remarkable output to date wasn't the rambling anti-feminist screed that made national headlines, but a fully-produced, 40-minute "mini-documentary" defending, yes, Roy Moore.

Released in late November to coincide with the Moore's final push before the Alabama Senate election, the video received virtually no attention. To date, the video has garnered only several thousand views on YouTube and Facebook.

RFT was responsible for one of those views, and after suffering through its full run-time, it's not difficult to see why Moore approves of Sykes. The "documentary" denigrates Moore's accusers and uses a combination of conspiracy theories and straight-up insults to try to poke holes in their respective stories.

Here's just a sampling of things Sykes does in this film:

— Calls one of Moore's accusers a "nasty crone."

— While discussing Beverly Young Nelson, who accused Moore of assaulting her when she was a 16-year-old high school student working as a waitress in Gadsden, Alabama, Sykes launches into a series of personal attacks, citing no evidence: "Our little red riding hood admits her own nasty and tawdry past begins at sixteen, and she admits that she cannot deny that everyone knows about her. The stories involve alcohol, boys, smoking, drugs, three divorces, attempted suicide, a financial train wreck, and a history of accusing several pastors of sexually molesting her."

— Describes the revelations by multiple woman who claimed Moore had preyed on them or tried to date them as teens as "the forgotten floozy story strategy." The strategy, according to Sykes' narration, was comprised of "made-up tales the Washington Post invents about some supposed woman from long ago." The same strategy, Sykes continued, was used to target "Clarence Thomas, Herman Cain, Ted Cruz, Donald Trump and now Roy Moore."

— Repeats the debunked claim that a Washington Post reporter was robocalling "thousands of Alabamans.

— Repeatedly criticizes the Washington Post. Most of the movie, in fact, is devoted to increasingly elaborate put-downs of the paper that first broke the stories about Moore's past. Sykes describes the Post's reporting as a "vicious attack" and "contrived fake news story," and the paper itself as "a fanatical left-wing mouthpiece and notorious liberal low-credibility liar that will print or do anything to propagandize against conservatives to defeat the conservative right."

— Claims, without attribution, that "police estimate that 1.3 million actual prostitutes work in America, not counting any who may be reporters in the Washington Post."

— Says of Moore's accusers, "These women have proved by their career choices that they are ready to do say anything at all for money. Especially Washington Post money, which comes with the extra enticement for fame, however wretchedly attained."

So, all you would-be MAGA-style politicians out there, that's all you have to do to get Roy Moore's endorsement — turn an endless series of untruths, slurs and conspiracy theories in YouTube fan fiction. Will it be enough to earn Sykes the hearts and minds of Republican voters, allowing him to triumph in a crowded primary?

Hey, this is Missouri. Stranger things have definitely happened.