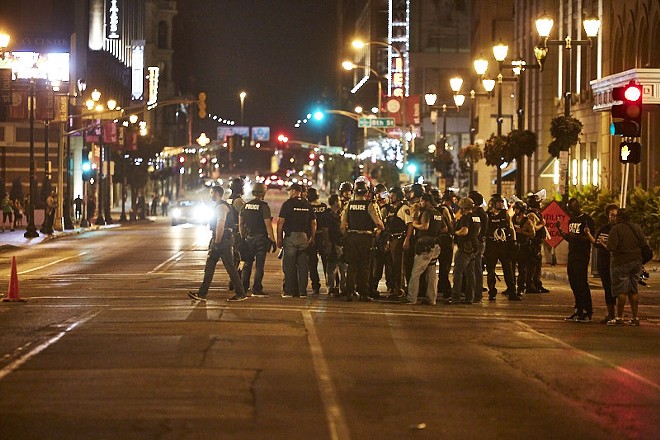 St. Louis Post-Dispatch reporter Mike Faulk is suing the city and nearly a dozen St. Louis police officers, alleging he was assaulted and illegally arrested while reporting on police protests.

Faulk, 32, was among more than 100 people whom police trapped in a downtown intersection before moving in for mass arrests. In the suit filed Friday afternoon, he says police tackled him to the ground, one officer mashed his head into pavement with his boot and another pepper sprayed him in the eyes for no reason.

On September 17, Faulk was covering the third night of protests following the acquittal of ex-police Officer Jason Stockley in the December 2011 shooting death of Anthony Lamar Smith.

The night culminated in an infamous incident now known as "the kettle" after the controversial tactic used by police.

Dozens of people, including Faulk and other journalists, were surrounded on all sides and herded into the intersection of Washington Avenue and Tucker Boulevard, where police officers showered them with pepper spray, zip-tied their hands and dragged them to police vans.

A documentary filmmaker claims he was knocked unconscious by officers. An Air Force lieutenant who lives in the neighborhood says he was beaten even though he and his wife weren't protesting and complied with every command.

The kettle was later cited in an ACLU lawsuit, which prompted a federal judge to issue new orders for the police to dial back aggressive tactics when responding to protests.

We are closed in on all four sides now I have no idea where people are supposed to go. People freaking out #STLVerdict


Faulk says in his suit that he identified himself as a reporter as was still arrested and assaulted.

After he was pepper sprayed in the eyes, Faulk was loaded into a police van with others. Through the van's window, the suit says he could see officers celebrating with high fives and cigars.

He heard them chanting, "Whose streets? Our streets!" The mocking chant was also recorded by Post-Dispatch photographer David Carson.

Once he was locked in the city's Justice Center, Faulk says he was never provided medical attention and jailers separated him from other inmates once they realized he was interviewing them. He was released thirteen hours later and given paperwork indicating he had been arrested for failure to disperse.

Faulk soon returned to work, but says he was taken off any stories related to the protests. His other assignments began to dwindle as well. The suit says he realized the incident had taken a greater toll than he first thought. He was having nightmares of being surrounded and has suffered psychological distress. He took a medical leave of absence in January and has yet to return.

Faulk is not sure he will ever be able to work as a reporter in St. Louis again because some will perceive a conflict of interest.

Along with the city, the suit names six supervisors who worked that night: Lt. Col. Gerald Leyshock, Lt. Scott Boyher, Lt. Timothy Sachs, Sgt. Randy Jemerson, Sgt. Mathew Karnowski and Sgt. Brian Rossomanno. Five additional officers are also being sued, but Faulk has not been able to identify them yet.

He is being represented by attorney David Nelson with the support of Arch City Defenders, a public interest law firm in St. Louis.