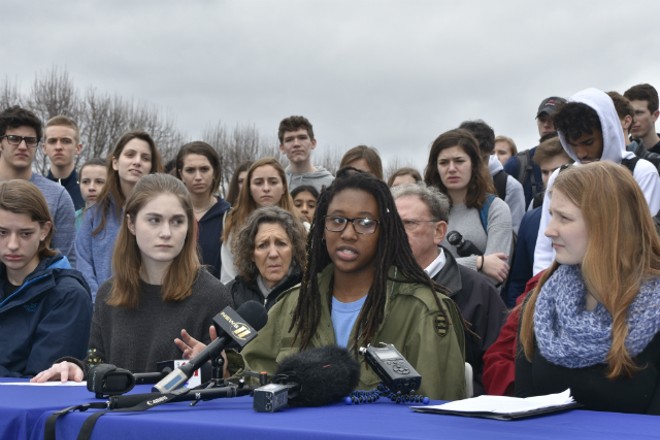 Students rallied outside a St. Louis high school on Friday morning as teens across the country take over the gun debate.

About 80 students walked out of Clayton High School at 11 a.m. and held a news conference on the edge of the campus. As the ones going to concerts, classrooms and soon college campuses — all places targeted in recent mass shootings — they told reporters they want a say in how the country responds to gun violence.

"At any moment, someone could walk into our school, CHS, with a fully loaded assault weapon and take the lives of our students and faculty before I could even blink an eye," Catriona Docherty, a junior at the school, said.

She was one of eight students from an American government class who spoke while elected officials and dozens of classmates filled in behind them. Students across the United States have begun to speak out, inspired by survivors of last week's massacre at Marjory Stoneman Douglas High School in Parkland, Florida.

An ex-student at the Florida school killed seventeen former classmates and teachers with an AR-15 rifle he was able to legally buy, despite multiple police calls to his home and a warning to the FBI. The surviving students have stormed social media and even grilled Florida Senator Marco Rubio and former St. Louis resident turned NRA spokeswoman Dana Loesch during a town hall televised on CNN.

On Friday, the St. Louis students said they would soon be voting and planned to consider candidates' positions on gun control when making their choices.

Margaret Baugh, a seventeen-year-old senior, singled out a bill proposed by Rep. Jered Taylor (R-Nixa) that would widely expand the places people could carry concealed weapons while barring institutions such as public universities from setting their own rules against carrying firearms. The bill would let company owners allow guns in a variety of businesses, even daycare centers.

"Seventeen people were killed at a Parkland high school last week," Baugh said. "Twelve of them were younger than I am. I shouldn't have to tell you why that (Taylor's bill) is a bad idea."

Clayton teacher Debra Wiens said she was "so proud" of the students. The teens who organized Friday's rally were current and former students in her American Government class. She said she helped get the word out about the event, but she had otherwise been a bystander as the students worked out their ideas following the Parkland killings.

"This is their hearts and their minds," Wiens said after the event.

The in-class debates have been passionate but civil, she said. There has been lots of disagreement. During the news conference, Clayton senior Neel Vallurupalli suggested arming highly trained and qualified school faculty members might prevent some of the bloodshed. President Trump and the NRA have pushed versions of the controversial strategy, and Vallurupalli described it as a "far out measure." But he still thinks it might be worth exploring after other options.

"If there are at least three other individuals in the high school that are armed, I think that a shooter would be less inclined to come to the high school," he said.

Rep. Stacey Newman (D-St. Louis) attended the rally at Clayton and planned to be at a second demonstration scheduled for 4 p.m. Friday at Parkway Central High School in Chesterfield.

A longtime proponent of stricter gun control, Newman said the students' outcry in the aftermath of the Parkland killings signals a shift in the debate.

"They're afraid to go to school," she said. "They're afraid at home, and now you've got teachers that are afraid. This is not the community that we want."

"Honestly, the danger of guns is always present to me," she said. "I don't know when somebody is going pull one out. I don't know who has one, or I don't know where it's going to be. Everyday of my life, I fear that someone will pull out a gun and shoot."