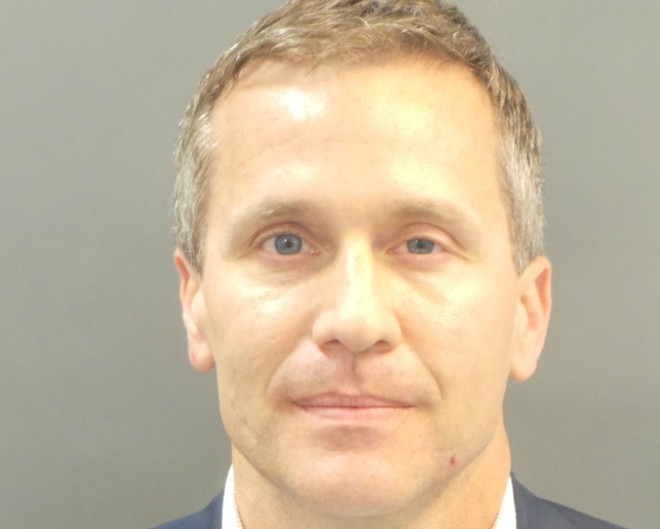 After weeks of media scrutiny and public hand-wringing, Governor Eric Greitens has been criminally indicted for felony invasion of privacy.

"It is essential for residents of the City of St. Louis and our state to have confidence in their leaders," Gardner said in a statement released along with her announcement of the indictment. "They must know that the Office of the Circuit Attorney will hold public officials accountable in the same manner as any other resident of our city. Both parties and the people of St. Louis deserve a thorough investigation of these allegations."

According to the indictment, Greitens is accused of knowingly photographing the victim "in a state of full or partial nudity" without her knowledge or  consent. He is also accused of transmitting the image.

The details of the indictment appear to match the details in Trager's story, which used a secret audio recording of the victim describing an affair with Greitens to her then-husband. The recording featured the victim describing how Greitens, in the course what appears to be a consensual encounter, blindfolded and restrained her. At that point, she claimed Greitens snapped a photo without her consent and, in her words, told her, "You're never going to mention my name, otherwise there will be pictures of me everywhere.'"

Greitens now faces a class D felony for Invasion of Privacy in the first degree. If convicted, he could be sentenced to up to four years in prison.

According to a tweet from St. Louis Post-Dispatch reporter Robert Patrick, the governor is already in custody.

I just saw MO Gov. Eric Greitens being led away in the custody of the St. Louis Sheriff.


Update: Citing Circuit Attorney spokeswoman Susan Ryan, the Post-Dispatch reports that Greitens is being released on his personal recognizance and will be free to travel.

Editor's note: The story was corrected to reflect that Greitens is being charged under a pre-2017 definition of a Class D felony, which carries a maximum punishment of four years in prison, not seven. We regret the error.