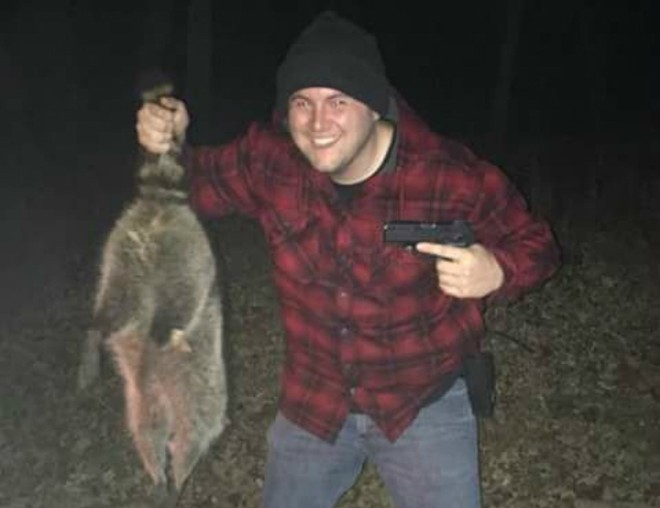 A south St. Louis County man had guns, explosive materials and what investigators suspect is a homemade silencer when he was arrested on Tuesday outside a high school, authorities say.

Dustin Lockwood, 23, of Arnold was sitting in his car in the parking lot of Fox High School when a teacher spotted a rifle case in the passenger seat and called police, according to the U.S. Attorney's Office. It was about 4 p.m., and Arnold police officers responded along with federal agents from the Bureau of Alcohol, Tobacco, Firearms and Explosives.

The school district canceled all evening activities and closed buildings following the incident.

Inside the 2001 Toyota Corolla, they found a .22-caliber rifle, a .22-caliber revolver, multiple spent shell casings scattered through vehicle, knives, a machete, the suspected silencer, 9mm bullets and .22 bullets. In the trunk were multiple bags and boxes of explosive materials.

Law enforcement officers then searched Lockwood's home and seized what they say were chemicals and "bomb making" components.

Lockwood told agents the explosive materials were for legal purposes, not to hurt anyone.  His grandfather, Steven Lockwood, told the St. Louis Post-Dispatch his grandson liked to make homemade fireworks.

"He's always been a good kid, though," the elder Lockwood told the daily. "He's never been violent or hurt anybody or bothered anybody."

Lockwood's Facebook page shows him shooting and posing with handguns. In his profile picture, he has a pistol in his left hand and what appears to be a dead raccoon in his right.

Lockwood, who does not appear to have a criminal record, has been charged with possessing a firearm in a school zone, a federal crime with a maximum sentence of five years in prison and a fine of $250,000.

He is scheduled for hearing on Monday afternoon to see if he will have to remain in custody. His attorney from the Federal Public Defender's office has asked the judge to move the hearing to the morning to accommodate witnesses expected to speak on Lockwood's behalf.