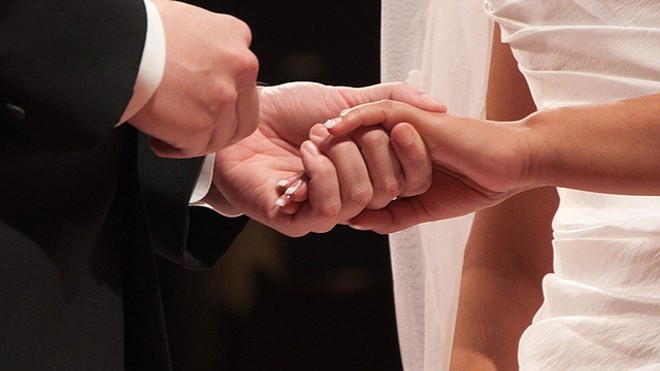 Last night, members of the Missouri House faced a vote on a bill that would bar marriage for state residents fourteen or younger. Fifty of them voted no.

Granted, the bill passed, 95-50, but the surge of opposition is noteworthy, since the bill is geared to reform a state law that's been criticized for making Missouri a haven for sex trafficking. It's a law that permits younger teens to enter into marriage, regardless of their age gap with their betrothed, so long as someone (parents, judges) say it's OK.


Under current law, for instance, a fifteen-year-old can marry a 30-year-old as long as they obtain permission from a parent. And those even younger than fifteen can legally marry with the approval of a judge.

The bill in question, sponsored by Representative Jean Evans (R-Manchester), would take parents out of the equation: minors between the ages of fifteen and seventeen would need a judge's approval to marry. Seventeen-year-olds would need a parent's consent. And, in a first for the state, Evans' bill would outright ban the practice of issuing marriage licenses to children fourteen or younger.

The measure would ban marriages involving one partner younger than seventeen and the other older than 21, and in the case of any marriage involving a child under eighteen, Evans' bill would also require a court "determine that there is no evidence of coercion or abuse of either person entering the marriage." (It's worth remembering that, in all other cases in Missouri, a person 21 or older can be charged with statutory rape for having sex with a minor under the age of 17.)

These aren't hypothetical scenarios. In August 2015, a pregnant fourteen-year-old was brought to Kansas City by her father, who reportedly aimed to marry her off to the 24-year-old "family friend" who had allegedly raped her.

The father and groom were both eventually criminally charged, but that's not always the case. Take the pregnant fifteen-year-old who showed up to the Johnson County Recorder of Deeds to apply for a marriage license, accompanied by her husband-to-be, a man in his mid-20s.

"I remain haunted by it," said Johnson County Recorder of Deeds Jan Jones in an interview with the St. Louis Post-Dispatch published last week. Even though the "couple" was being investigated by the state Children’s Division for suspected child abuse, Jones, in her capacity as Recorder of Deeds, had her hands tied by a state law that required her to issue the marriage license. So she did.

Citing an analysis by the Tahirih Justice Center, the Post-Dispatch reported last week that 7,342 teens under eighteen were married in Missouri from 2000 to 2014. Eighty-five percent of them were girls. According to the research, 52 Missouri girls under fifteen were married in 2007. One-third of those marriages featured grooms in their 20s, 30s, 40s and 50s.

That 50 state lawmakers defended the current law with their votes last night is noteworthy. And in the context of recent history, the vote becomes even more curious.

Last year, Evans sponsored the exact same bill, and it passed the Missouri house with overwhelming support, with the only "nay" coming from Republican Jeffrey Pogue (R-Salem.) The 2017 bill ultimately died in the Senate, and Evans refiled the legislation this year.

This time around, Pogue was joined by dozens of lawmakers who, just one year before, had approved the same bill. Comparing the roll call between 2017 and 2018 reveals that 47 lawmakers flipped their position to vote against Evans' marriage bill.

That change stood out to state Representative Peter Merideth (D-St. Louis), who took to Facebook last night to castigate his fellow lawmakers.

In a phone call with the RFT this morning, Merideth suggests that the wave of flip-flopping was sparked by Republican lawmakers who spoke against the bill on the grounds that it infringed on personal freedom and parental rights.

Merideth notes these same lawmakers have had a much different view of personal freedom when it comes to reproductive rights.

"Last week they were arguing that the government should be involved in approving a minor's abortion," notes Merideth, referring to a bill being considered in the House that would require a minor to inform all parents or guardians before receiving an abortion.

"So it's a mind-boggling contrast," he adds, "when a minor who's not even old enough to enter into a legally binding contract is being told they can enter into a relationship that makes statutory rape legal."

Editor's note: The story was updated after publication to include additional context about Evans' 2017 bill.