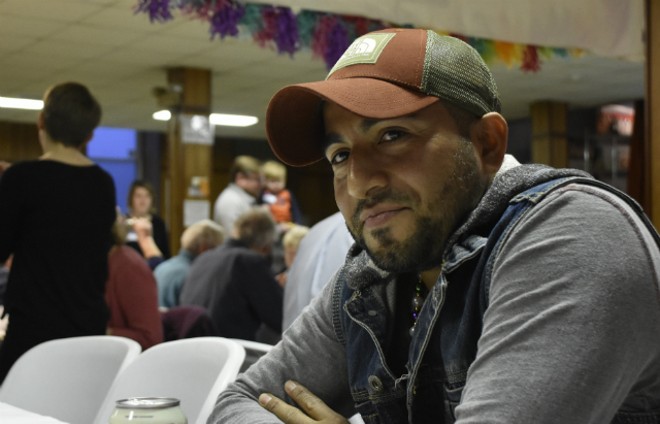 Alex Garcia, never a big fan of the spotlight, was the guest of honor last night at two parties.

Friends and supporters held simultaneous dinners as fundraisers for the married father of five, who took sanctuary from immigration agents nearly five months ago in a Maplewood church. By moving into Christ Church, Garcia hoped to stop deportation — the U.S. Immigration and Customs Enforcement agency has a policy of not forcing arrests at sensitive locations like churches unless there is an emergency.

The 36-year-old construction worker greeted guests in person at a Fat Tuesday potluck in Christ Church's basement hall of Christ Church. He spoke via webcam to a second crowd gathered for a banquet with his family in Poplar Bluff near their home.

"I could not do it without your support," he said, sitting behind a laptop in the church hall.

Quiet by nature, Garcia now sees publicizing his situation as his best hope to persuade ICE to give him at least a temporary reprieve from a deportation order. Officials previously granted two year-long stays but denied his request for 2017 when the Trump administration shifted enforcement priorities. They have also rejected subsequent petitions, including one signed by hundreds of people in Poplar Bluff.

There is no court for Garcia to appeal to because ICE is technically enforcing a judge's expulsion order from 2000 when he was caught during a previous attempt to cross the border. The only avenues left are to return to his native Honduras for a minimum of ten years and reapply for entry, or persuade ICE to reverse its decision.

The prospect of Garcia being separated for at least a decade from his wife and children — all are American citizens — is the family's nightmare. They have chosen a public path in hopes enough people will hear their story and ultimately appeal to ICE. Garcia was on the cover of the Riverfront Times in November and has since been interviewed, filmed and photographed in multiple stories by multiple media outlets.

Tuesday's dinners were both an opportunity to raise money while Garcia cannot work  and bring more even more attention to their situation. The two groups were connected by a live feed broadcast onto large screens in each location.

"What we're doing is begging ICE to take mercy on this family," says Garcia's attorney, Nicole Cortés of the MICA Project in St. Louis.

Cortés was in Poplar Bluff on Tuesday with Garcia's family, Pastor Rebecca Turner of Christ Church and Sara John of the St. Louis Inter-Faith Community on Latin America, an activist organization assisting the family. They joined Garcia's wife, Carleen, as she addressed both groups.

"The letters, the prayers, everything, it's been," she said, trying not to cry. "It's all helped very much."

Carleen and the kids come to Maplewood to visit at least every other weekend. Otherwise, it is more like this, talking through a webcam in the evenings. On Tuesday, Garcia spent much of the night on the edge of the crowd, but he moved to front to speak through the computer. He smiled as his kids took turns in front of the camera.

"There's my boys," Garcia said as his two oldest popped up on the screen stretched across a wall of Christ Church. "I love you guys."

Christ Church has been posting updates on Garcia's situation and accepting donations to help his family on its website. 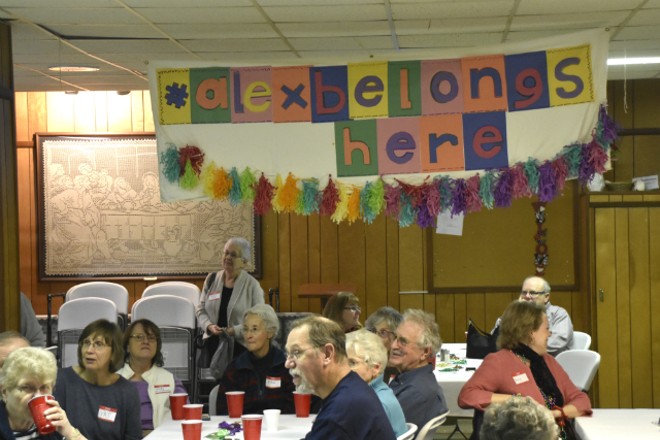