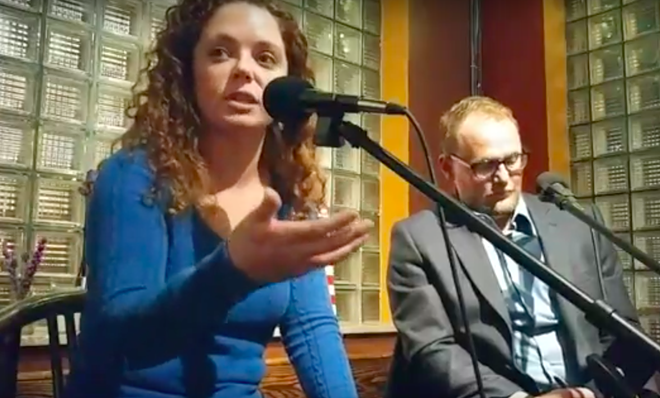 Last night, Annie Rice won a resounding victory, with nearly 60 percent of 8th ward voters choosing her to represent them on the city's Board of Aldermen. But later this month, the Democratic Central Committee will weigh a bylaw change directly aimed at punishing Rice's supporters. If members approve the proposed amendments, anyone who "supports or endorses" candidates like Rice "shall be subject to censure." Committee members who follow in Rice's footsteps and run for office without the party's blessing could face removal. The ugly situation says a lot about the mutinous mood — and old guard pushback — roiling the St. Louis Democratic Party these days. Progressives have taken aim at the Democratic establishment in recent years, winning some key victories (Bruce Franks Jr. for state rep) and coming tantalizingly close in others (Tishaura Jones for mayor). In St. Louis, it's no longer enough to ask whether someone is running as a Democrat; the real question is whether they're allied with the upstart progressive wing or the establishment one allied with the powers that be and the party's longstanding donors (developers, lawyers, lobbyists).

Rice's victory last night was a big win for the progressives. A supporter of Black Lives Matter who opposed a pay raise for police, Rice has fervent support within the movement.

But not, as it turned out, among the establishment. Tasked with choosing the Democratic Party's candidate to replace longtime Alderman Stephen Conway, the Central Committee was force to choose between two of its own members — both Paul Fehler and Rice were elected to its membership by Democratic primary voters in August 2016. The committee chose Fehler, which both put his name on the special election ballot and let him run with a big "D" next to his name.

Yet after the committee chose not to let Rice's supporters speak at the meeting, she decided to run anyway. She mounted a challenge as an independent, gathering signatures to earn the right to enter the race.

As we saw last night, she won, and handily. But some longtime members of the Democratic committee found themselves in a sour mood even before her victory. They questioned why a Democratic elected official would challenge the party's nominee — and why other Democratic elected officials would openly campaign for her. Some of Rice's most fervent supporters on the committee refused to support Fehler even after he got the nod; they continued to campaign for her, even though she was challenging the party's nominee as an independent.

The changes to the committee's bylaws would allow that unhappiness to become discipline.

The first new article under discussion on February 24 would create a mechanism for censuring any members who fail to toe the line:

The second would create a path for censure and removal — and makes clear that "running for office in any capacity other than as a Democratic candidate" is enough to trigger a vote for removal. (The current bylaws have no mechanism for censure and no mention of what happens if someone supports an independent, or runs as one.)

In Rice's case, removal would be a moot point. Now that she's becoming the alderwoman, she will be vacating her seat as committeewoman anyway.

But censure could have real consequences for committee members who supported her. If the proposals are approved, members who backed Rice would be forced to defend themselves at an "administrative hearing." If found in violation, they could lose the right to vote on the committee or even address it. "The majority vote of the officers will determine the severity and duration of the censure," the proposed bylaw warns ominously, "but in no case shall the duration exceed six months."

That committee members — who are, after all, voted in by the Democratic primary voters, not party bosses — must defend themselves against charges of impurity has drawn pushback. Marie Ceselski, the committeewoman for the 7th Ward and a Rice supporter, calls it the "great activist purge."

On Twitter, the always outspoken Ceselski also compared it, visually, to a garbage fire:

The Great Activist Purge happens 9 am Saturday @ STL Dems Meeting @ Crusoe’s, 3152 Osceola. Agenda: Proposed New By-Laws to punish @AnnieRiceStL for running as Independent and other Dems for supporting her. Open to the Public. NOT ♿. Public Transit: #73. pic.twitter.com/91IHRtrt2V


As Ceselski notes, the proposals will be discussed at the committee's meeting scheduled for Saturday, February 24, at 3152 Osceola. The 9 a.m. meeting is open to the public, though you shouldn't count on getting a chance to speak. Rice's supporters learned that the hard way in the meeting that kicked off this fight — although it's fair to say the war within the St. Louis Democratic Party was raging long before that.

Editor's note: Our original version of this story contained the right date for the meeting in question, but the wrong modifier. February 24 is not this coming Saturday, as we indicated, but rather the one after that. We regret the error.