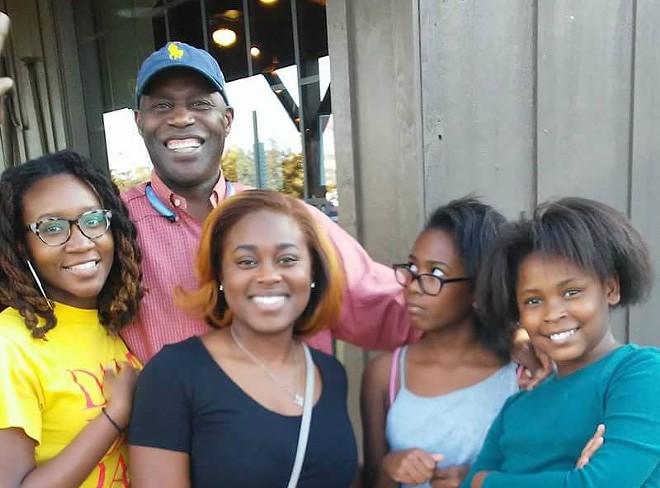 In May 2016, St. Louis police arrested an electrical engineer named Charles Lewis on two counts of "making terroristic threats." Lewis had a heated exchange with a former employer — they called the cops, and he found himself facing criminal charges.

Lewis, 62, protested his innocence, and the case went to trial last March. The jury found him not guilty of one count; on the other, jurors deadlocked, with ten of the twelve voting not guilty.

Lewis had spent ten months in St. Louis' notoriously hellish jail, called the Workhouse, while waiting for his day in court. He endured another two months after trial — waiting for weeks on end until the Circuit Attorney's Office decided, ultimately, not to retry the case.

But it's what happened next that led Lewis to file a lawsuit in federal court yesterday against the city, Sheriff Vernon Betts, Circuit Attorney Kim Gardner and a host of lower-level officials.

Even after the case was finally dismissed for good on May 15, 2017, months after Lewis' partial victory at trial, Lewis stayed stuck in jail for eight more days. It took his public defender badgering the sheriff's office time and again to ultimately get him released, his lawsuit alleges.

That lawyer, Elad Gross, says Lewis isn't alone. Last September, he filed suit on behalf of an eighteen-year-old woman Destiny Payne. Payne had been held in the Workhouse for fifteen days after the charges against her were dropped, her suit alleges. When Payne was released, she had no idea she'd held longer than she should have.

Gross believes there are many more like her. "Unfortunately, that story is pretty common," he says. "Most people in this situation, they're in jail, the charges against them are dismissed — they're like, 'Thank God I'm done.' They're just glad they're released; they never think about it." But, he says, holding defendants for days or even weeks on end without any charges pending is a grave infringement upon their constitutional rights.

"Keeping him there without any reason is a violation of a number of amendments," Gross says of Lewis. "There's no due process, they're seizing his person, he's being deprived of his freedom and liberty — and there's no reason for that to happen. None."

A spokesman for the sheriff's office told us, "It is Department policy not to comment on the specifics of pending litigation. The general process is the City of St. Louis Sheriff’s Department does not run or is responsible for the city corrections facilities. The City Department of Corrections is responsible for housing and the release of prisoners. City Sheriff’s only transport prisoners between facilities and the courts."

A former assistant attorney general for the state of Missouri, Gross says he stumbled on the situation after being assigned to be Payne's public defender. She'd been held for months in the Workhouse without ever seeing a lawyer, and he couldn't even get in at first due to a lice outbreak at the jail, he says. When he finally got to her, she told him just to plead guilty to whatever it took — she was desperate to get out of the Workhouse.

Once Gross finally was able to see her complete case file, he was shocked to learn the charges had been dropped days before. After he began making phone calls, he says, Payne was released from jail at 3 a.m. He spent days tracking her down to let her know what had happened.

While researching her case, he began asking contacts about similar occurrences. That's when he learned about what had happened to Lewis.

Payne's case recently survived the city's motion to dismiss, and so Gross says he plans to dig deeply into the problem — and how frequently it's occurring. "I think there are a number of other people out there who've been affected by this, and they may not even realize it," he says.