"You entrust your loved ones to be taken care of at these facilities," says Doris Barge, whose 94-year-old mother is a resident at Christian Care Home in Ferguson. "It's been horrible."

Barge's mother moved to the nursing home in Ferguson four years ago because she suffers from Alzheimer's disease. It was a big adjustment, but at first, Barge says, it went well.

"She was familiar with a lot of the young ladies and she got the baths, her hair was always combed, all the time with these girls," Barge says.

But in December, workers at home went on strike. They have remained on the picket line two months later. And family members like Barge claim that care at the home has suffered during that time — to the point that many of them joined the striking workers outside yesterday in freezing temperatures.

The care workers say they went on strike after the nursing facility's ownership, the Christian Women's Benevolent Association, refused to obey labor laws and negotiate with them. Now, three months in, the group is demanding that the association recognize the rights of its workers and residents.

The Christian Women's Benevolent Association did not respond to a message seeking comment.

In the last two months, the striking workers have been joined by community and religious leaders such as state Representative Bruce Franks (D-St. Louis), as well as representatives from their union, SEIU Healthcare. Today, Pastor Darryl Commings of Bethany Way Fellowship led the group in a prayer service and protest chants, reminding them of Dr. Martin Luther King Jr.'s speech to union workers 50 years ago. Both a majority of the workers and the population they serve are black.

Protesters stayed close to each other for warmth and passed around hand warmers. Large signs hanging around their necks read "Union justice now," "I am on strike" and "I am a man."

Brenda Davis has been working at Christian Care home for five years and has been at the bargaining table for four. "It's been three degrees. We've been snowed on and rained on," Davis says. She vows that the group will continue to strike until management is ready to "sit down and bargain in good faith."

According to Davis, the problems began to emerge after a change in management. The workers' grievances range from the employment of new, younger workers who some believe are not ready to take on the challenge of caring for the elderly to management allegedly assigning the group an "unreasonable" representative. Davis claims that the representative had no education about working with unions and that no one else of authority was ever at the meetings.

Since the new management took over, Davis says the home has closed its Alzheimer's unit; patients who previously lived on that floor have been dispersed throughout the general population, she says. 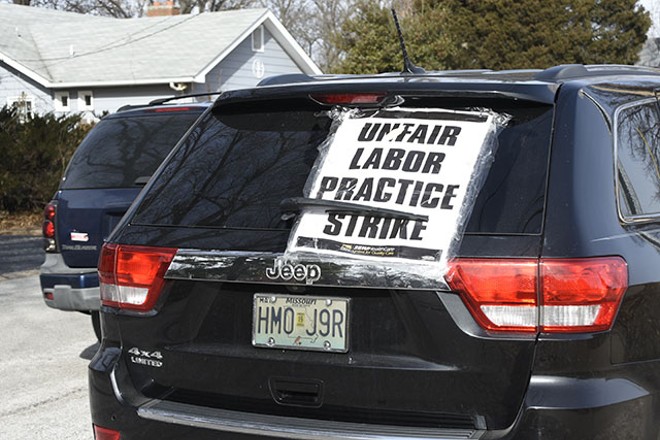 "If there was Christian Care, we'd be inside," said Pastor Commings as the group began to gather and begin their six-hour shift of picketing as temperatures rested below freezing. From 9 a.m. to 3 p.m. every day, the workers take their places outside the home. When a few picketers get too cold, they take a few minutes to warm up in their cars and then switch with the next group looking to warm up.

But at least yesterday they had supporters — family members who say they want management to satisfy the union's demands. The presence of family members like Barge brought rejuvenation to the group's energy.

"My concern with these workers, I just want to see them back in here," says Barge.