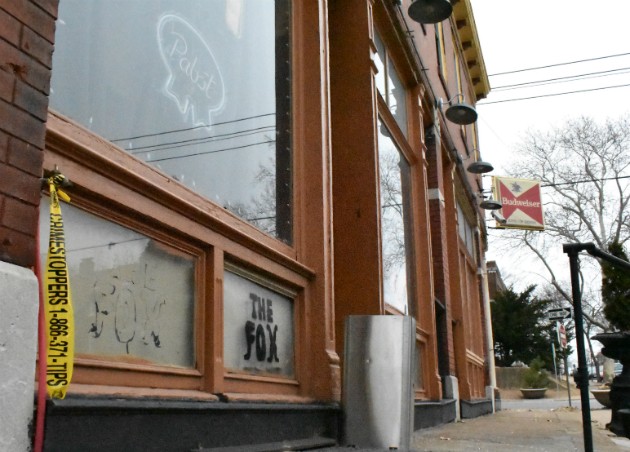 Update — 1:35 p.m. — This story was updated after publication with additional details from Velda City's police chief.

Police received multiple calls starting around 11:35 p.m. about a shooting at the Grey Fox Pub, on the corner of Spring Avenue and Potomac Street in Tower Grove South. Early reports said the wounded man was conscious and breathing when he was taken to the hospital.

The man had been thrown out of the bar earlier in the night because he was drunk and belligerent, according to Velda City police Chief Daniel Paulino. He soon returned with a knife and forced his way in, smashing the glass of the front door before entering.

Paulino says his officer was hanging out in the back of the bar with friends but hurried forward when he heard the sound of glass breaking and someone telling the man to "drop the knife."

The patron tried to stab the bartender, Paulino says. The officer pulled out a personally owned gun, identified himself as a cop and ordered the man to drop the weapons, according to the chief.

The man was in critical but stable condition following the shooting.

St. Louis police said on Thursday morning the case was still under investigation and did not provide details. Paulino says the case has been referred to the St. Louis Circuit Attorney for charges against the man.

Paulino did not release the officer's name, describing him a 32-year-old Asian man, who has worked five and half years for Velda City, a small city in north St. Louis County.

"Based upon what I have been told by the St. Louis City Police Department and other witnesses accounts to include potential video surveillance; the officer did everything he could to defuse the situation and gave the suspect numerous opportunities to drop the knife before being forced to defend himself and the lives of the bartender and other customers," Paulino said in a statement.

The officer is on administrative leave pending the investigation — standard protocol for the department for any police shooting.

Known for its weekend drag shows, the Grey Fox is more of a mellow neighborhood bar during the week. It has made the RFT's list of the city's best gay bars in the past. We've reached out to the Grey Fox and will update this story if we hear back.