After 14 Years in St. Louis, a Liberian Immigrant Seeks to Reunite Her Family

Over the years, Mary Tugbah tried to get things ready for her family to join her in St. Louis.

She got a job in the laundry room at the old Millennium Hotel downtown and an apartment off of Morganford Road in south city. When the hotel closed, she moved on to cleaning another hotel, and when that one closed too, she started cleaning yet another one.

Originally from the coastal African country of Liberia, Tugbah had survived two civil wars and arrived in St. Louis in 2004, figuring she could establish herself and bring her three grown children along shortly after. Much of her family died during the conflicts in her home country, and she had hoped to regroup in the United States.

"My mom died," Tugbah says, sobbing hard as she describes a tragic history. "My pa died. My sister died, too."

Yet bringing her family back together has been more difficult that she had thought. Because her children were older than 21, immigration family reunification rules make it harder to gain permission for them to join her in St. Louis. Tugbah has kept working and saving, hoping she will someday make enough money to sponsor them. She became a citizen in 2011. She now has two grandchildren. She collects stuffed animals to give them when they finally meet.

Along with Sister Paulette, who has shepherded generations of immigrants and refugees through her work at St. Pius V Catholic Church on South Grand, Tugbah has a network of allies. It includes Melissa Elliott of New City Fellowship church in Tower Grove South, where Tugbah is part of a multicultural, multinational congregation. Jeannine Cole, an employment specialist with the nonprofit Bilingual International Assistant Services, has helped her find new jobs through a string of bad luck with hotel closures.

There is also Sister Kate Reid, who is a nun as well as an immigration legal advocate with Legal Services of Eastern Missouri.

Together, the group has tried to help Tugbah bring her children and grandchildren to St. Louis. Lately, they feel like they're getting closer. Her offspring, who now live across the border from Liberia in the Ivory Coast, are gathering their paperwork and could have interviews with the U.S. Consulate this year.

"The ideal is for them to come all together," Cole says.

However, it looks more likely that they will have to come individually. Tugbah, 66, is now working part-time after yet another hotel closure and makes only about $200 per week. If the 2018 guidelines to sponsor a family member remain the same as last year, she would be required to make annual salary of more than $15,000 — nearly $5,000 more than her current income. The minimum salary increases with each additional sponsorship.

The idea is that Tugbah needs to show she is capable of supporting each person she brings to the U.S., although her allies point out her grown children would probably be the ones taking care of their mother as she grows older.

They're hoping to find other citizens willing to sponsor one or more of Tugbah's children, who are in their 40s. A sponsor would need to meet those income requirements, plus show they could support members of their own households and the new arrivals.

If they can't bring all her children and grandchildren at once, Tugbah's supporters have suggested that just bringing Tugbah's middle son, Peter, to St. Louis, would go a long way, since he could go to work and eventually help bring the others. He has already passed his security clearance and is trying to collect the rest of his paperwork, some of which he'll need to return to Liberia to pick up in person. Nothing about trying to immigrate from a war-torn country is easy.

It's been nearly fifteen years since Tugbah has seen Peter. Even though there are still significant barriers, she smiles when she thinks of finally having some family in St. Louis. 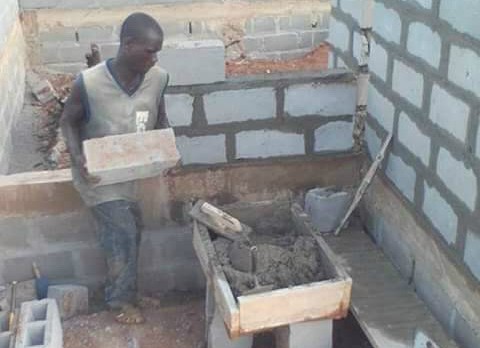