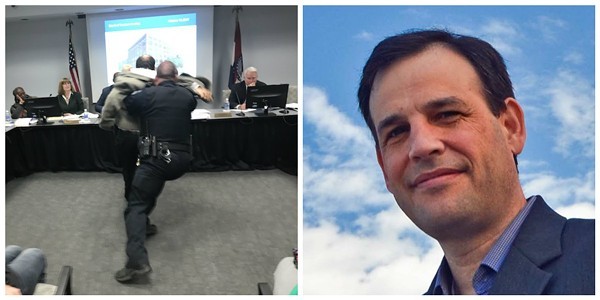 The math instructor who was body-slammed by a St. Louis police officer in October has filed suit against the cop, St. Louis Community College and the vice chairman of its board of trustees.

Steve Taylor, 53, made national headlines over the incident, which was captured on video at a board of trustee meeting. The video shows Taylor approaching the podium to object to Vice Chairman Rodney Gee's instruction that audience members not applaud those speaking. But before Taylor could get close, a St. Louis police officer identified in the suit as Robert Caples grabs him from behind.

As Taylor staggers forward, Caples drops him swiftly to the floor. Taylor says in the suit he suffered traumatic brain injury, a concussion, bruising and chest pain.

In the suit, Taylor alleges violation of his due process and free speech rights, as well as unlawful seizure, unlawful arrest and false imprisonment.

The college has suggested that Taylor "charged the table" where board members were seated. But the footage seems to show him trying to catch his balance after being grabbed from behind.

The lawsuit captures the melee:


After defendant Officer Caples grabbed, tripped, tackled, and body slammed plaintiff Taylor into the ground, audience members can be heard yelling “What are you doing?”; “Oh my God”; “Let him go”; “That is beyond the pale”; “That is wrong”; “First Amendment rights”.

In the suit, Taylor says he asked for medical attention, and the St. Louis Fire Department provided aid. He was later charged with resisting arrest and disturbing the peace; the first charge has since been dismissed, while the other is still pending.

The lawsuit argues that the board's prohibition on clapping, the announcement that originally drew Taylor's objection, is a "content-based restriction on free speech," which the courts have found is not permissible under the First Amendment. While the board would have the right to broadly prohibit clapping, Taylor and others have noted that the board didn't object to clapping when they were the recipients; it was only after the commencement of the public comment portion, during which someone spoke against them, that Gee announced that clapping would not be allowed.