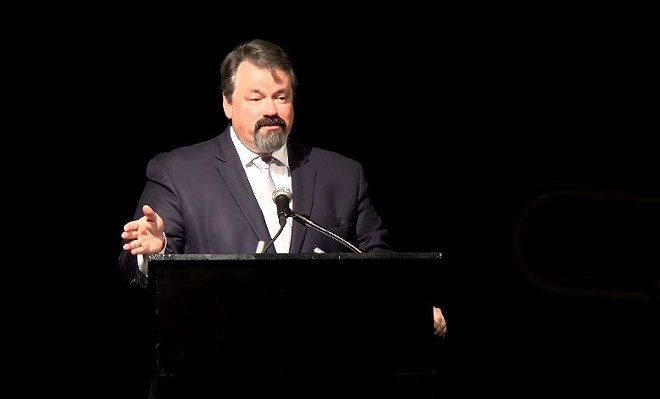 It was January 11, and Matthes seemed in control during the opening parts of his speech to the Values Diversity Celebration. Addressing a crowd of more than 1,000, he began his remarks by touting a drop in black unemployment over the last three years.

But things took an awkward turn when he attempted to use Ferguson as a transition to discussing the successes of a summer jobs program.

"Ferguson is something that haunts our state," he remarked, noting that "young black Americans all over the country felt that Michael Brown did not get a very fair shake from the press."

Here, Matthes clearly intended to discuss #IfTheyGunnedMeDown, a viral hashtag which spread across Twitter in the days following Brown's death. (Naturally, though, he blanked on the name of the hashtag.)


Basically, the hashtag highlighted the media's tendency to portray black people killed in police shootings in the worst visual light, casting even victims as troublemakers and reinforcing racial stereotypes. The hashtag was usually accompanied by two photos showing contrasting images of the same person, and frequently paired with the caption "What picture would the media choose?"

And if it was already strange that Matthes was bringing up a three-year-old hashtag campaign that covered media bias, police shootings and racial stereotyping, he  still somehow made it weirder.

First, despite his reference to Ferguson, Matthes seemed to misunderstand the basic idea behind the hashtag. (He also misstated the name of the hashtag, describing it as "Which one would they use of me?" So close, sorta.)

"So," Matthes said, "this movement was young African Americans putting pictures online of what they looked like on the weekend and what they looked at during the week. It's key thing for me. Look at these."

A projection screen showed a collage of the photos, apparently pulled from various #IfTheyGunnedMeDown tweets.


I'm going to be very honest with you as a white man. These make me a little uncomfortable. In the upper left, he's flashing a gang sign. The guy in the middle looks like he's going to rob a bank. The upper right, I'm not sure which gender he or she is. I'm befuddled. Lower left, why is he so angry? And the lower right, that's totally inappropriate dress in a professional environment if you're looking for a job.

Matthes then asked for the next slide, which he introduced as showing "what these folks look like during the week."

"Here's what they do for a living," he said, to inexplicable applause. The photos dissolved to the companion set, this one showing a nurse, a firefighter, a solider, a college student and a man in a dapper suit.

"Now," Matthes continued, "I'm not so uncomfortable any more. What's the difference between the first pictures and this one? There's only one, [they're] the same people — a job is the only difference."

The city manager then turned to encouraging Columbia businesses to hire black residents, "to help us close this gap." But here too his statement became muddled and, in the context of his speech about black unemployment, condescending. During remarks about a summer jobs program, Matthes noted that the program provides job coaching to teach young people to meet the expectations of the workplace.

"I know I didn't know this at fourteen. You have to be on time. That matters to your employer! It's best to have a bath, too. These are fundamentals."

To his credit, Matthes quickly added, "I'm talking about me, now. If only I'd had a job coach." Still, the implication that lingered was that young black job-seekers needed to be told to take baths.

Matthes concluded his speech by touting a city-maintained list of women and minority-owned businesses, urging the audience to invest in diverse communities and "anyone disadvantaged in the business enterprise."

"It's hard enough to be successful in business as a white man; it's not an easy thing. Seventy percent of startups fail," he continued. "But it's even harder for everybody else. And when we're honest we can admit that."

A decent and just sentiment, but perhaps Matthes should take a listen to a few of MLK's speeches — he could use a lesson from the civil right's leader careful use of metaphor and context. Because this speech, to borrow Matthes' phrase once again, is a liiiiiittle uncomfortable.

You can watch Matthes' full speech below.

Update January 21: In an interview with The Columbia Daily Tribune, Matthes apologized for the speech, telling the newspaper, "I understand some people were offended and for that I am sorry." Matthes said he intended the speech to communicate the lesson that everyone has biases.