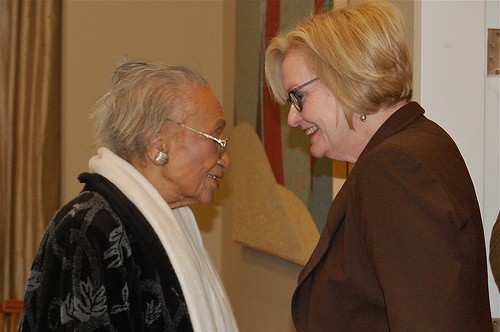 Civil rights figure, activist and attorney Frankie Muse Freeman, who died at the age of 101 on January 12, made an undeniable impact on St. Louis. Now, the public is invited to honor her life, with funeral arrangements scheduled for this Friday and Saturday.

A public viewing will be held in the Grand Hall of the Missouri History Museum from 5 p.m. to 8 p.m. on Friday, according to the St. Louis Post-Dispatch. Representatives from Delta Sigma Theta sorority and the Links Inc., which were both organizations with ties to Freeman, will lead short ceremonies during the evening. The public is also welcome to attend the funeral at 9:30 a.m. the following day at Freeman's church, Washington Tabernacle Missionary Baptist Church, followed by burial at Calvary Cemetery.

Freeman's daughter, Shelbe Patricia Bullock, said Friday that Freeman "went peacefully with her family beside her," according to the Post-Dispatch. She described her mother as "a marvelous, warm, woman."

Indeed, Freeman made a profound influence during her lifetime. Senator Claire McCaskill (D-Missouri), who entered remarks into the congressional record praising her last year, called her a "St. Louis legend."

“Frankie Freeman — courageous, strong, and with a towering intellect — paved the way for both black and women attorneys," McCaskill said in a statement released Saturday. "She was a civil rights icon, a mentor, and a dear friend. The world will miss her righteous passion. We have lost a St. Louis legend.”

Originally from a small, segregated town in Virginia, Freeman went on to attend Howard University Law School and became a civil rights lawyer.

Although Freeman's life spanned numerous achievements, perhaps her most iconic was her work as lead counsel in the landmark 1954 case Davis vs. St. Louis Housing Authority. The suit brought legal racial discrimination in public housing to an end, as Fox 2 recounted Friday.

She was a trailblazer in other ways as well, becoming, in 1964, the first woman on the U.S. Civil Rights Commission. She also served as an assistant attorney general for Missouri and staff attorney for the St. Louis Land Clearance and Housing Authorities.

More recently, Freeman was named St. Louis' 2011 Citizen of the Year. In 2015, she was appointed to the Commission on Presidential Scholars by President Barack Obama. Last year, she finally got her star on the St. Louis Walk of Fame, as well as a statue in Kiener Plaza.

For more about Freeman, you can read her 2003 memoir, A Song of Faith and Hope: The Life of Frankie Muse Freeman.