Eric Greitens Is in the Hot Seat. But We're Wrong to Let a Spurned Ex Drive This Story 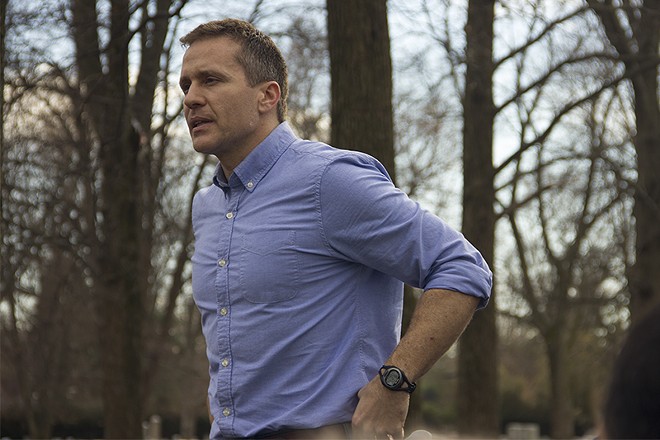 Last night, KMOV dropped the bombshell that everyone who's anyone in Missouri politics has been whispering about for more than a year: Governor Eric Greitens had an affair. He confirmed it. First Lady Sheena Greitens made a brief statement acknowledging that she now knows about it, and asking everyone to leave the family alone. The only thing more predictable than the couple's humiliation was the glee everyone took in talking about it.

But KMOV's piece was unusually ugly, for a reason I didn't see anyone acknowledging last night: Its sole source for the affair was the ex-husband.

Yes, in this case, the reason we found out about this three-year-old personal matter between a politician and his paramour is because the governor's girlfriend was married to an utter asshole — the kind of rat who not only secretly tapes her during the moment she confesses the affair, but tweets about his righteous anger in hopes someone will reach out and then, later, gives that tape to a TV news station. This peach of a man not only shared this intimate and incredibly sad moment with a reporter, but gave an interview in which his identity was carefully cloaked to opine about just how terrible the governor was.

Oh, and this shy violet, naturally, hired the most media-savvy lawyer in town to help push his interests. Because when you're only reluctantly coming forward, the attorney you hire is Albert Watkins.

There is, one must acknowledge, a very disturbing component to the story he's telling. Did Greitens — then a candidate for governor — take a nude pic of the woman when she was blindfolded during their first assignation and tell her the photo would be released if she ever told anyone about their affair? The woman told her husband as such, although a transcript of the conversation shows she also told him that Greitens apologized that day and told her he'd erased it. (Greitens' lawyer, James Bennett, denied the allegation last night; as KMOV acknowledges, the woman continued to see Greitens after that.) Still, if true, it speaks to a level of cold calculation that's horrifying even to those who've long suspected the worst about the governor.

And yet there is something even more disturbing, to me, about giving the floor to a man who surreptitiously records his wife at her lowest — and then insists on telling the story that is only hers to tell.

It's easy to forget this in 2018, but revenge isn't just about sharing nudes. Revenge can also be a matter of forcing someone else's private story to become public. It can be about fanning the flames and still trying to claim plausible deniability as you watch your ex-wife's privacy go up in flames.

In a statement through his attorney, the man says he cares "only for my children and the reputation of their mother in their eyes. Therefore I went to exhaustive efforts to keep this information out of the spotlight. I now understand that this information is out there from other sources and won't go away."

I don't buy it. This story has been the single worst-kept secret in St. Louis, thanks almost entirely to his efforts. He may have only talked to one political operative, as he says in a statement through his lawyer, but that operative talked to plenty of people who, yes, talked to people. And as the Post-Dispatch acknowledged last night, it too interviewed the man, but it decided against running a story because "the woman in question has consistently declined to be interviewed" (emphasis added). The paper's language makes clear that she was given multiple attempts; she didn't want to talk. By releasing a tape of her most private moment — a conversation he badgered her into having, promising "it will never leave the car," her ex decided otherwise for her.

And KMOV didn't just carry this guy's water. They let him play the victim without even making him go on the record under his own name.

Reasonable people can disagree about whether adultery is newsworthy. But you'd think we all could agree that an ex-husband should never, ever get to speak for the woman who left him. Even if she cheated. Even if she felt intimidated by a politician's actions during their first hookup. It's not for her ex to decide whether the intimate details she told him in a moment of crisis are grist for the rest of us.

If Greitens' ex-lover wants to tell her story, to law enforcement or to the media, that's up to her. But until that happens, I'd argue we should all look away. No more pretending to feel sympathy for Sheena Greitens, no more clucking sadly for the poor first children. I know it's hard to give up the moral high ground, but by giving the floor to a spurned husband, KMOV lost it.

It's clear from the immediate, and visceral, reaction the segment got last night that I'm living in a pipe dream. Of course we're going to talk about this. The Post-Dispatch itself relented and published a story last night about the situation, as did every other media outlet that had previously taken a pass. You can't even blame them for that — now that Greitens has confirmed the affair, even while denying the disconcerting details that have quickly made this a national story, it's news. We all have to acknowledge it.

And that's how angry exes win. Sure, this morning you can find plenty of well-meaning people enthusing over (and undoubtedly prematurely convinced of) Greitens' downfall. But we'd be wise to remember how we're getting these details: a man has given us access to a woman's words when she had no desire for us to hear them.

In a transcript of the very tape he'd later release to KMOV, the man begins to rant about how Greitens' actions with his wife don't match his public image. He's just gotten confirmation of the sexual interaction he's long suspected, and he's livid. "This motherfucker is running for governor," he says at one point. "... He comes off as this motherfucking manly hero and it's all about resilience and honor and all that."

"I knew you would obsess," the woman tells her ex in the transcript he's given the media of her confession. "You're obsessed."

Later, the man warns, "I could destroy his career in half an hour."

"If you do that, then I would hate you," she says.

It took him more than half an hour. But it's pretty clear the cheated-upon husband got his revenge.

Editor's note: After publication, we got a call from Albert Watkins, the attorney for the woman's ex. He notes that the man was first contacted by an operative in the camp of Greitens' gubernatorial opponent in 2016. He declined to talk then and was glad that was the end of the story.

Watkins says the man has recently been inundated with calls from the media, including national outlets. He decided to take the bull by the horns after a "young, inexperienced" member of the national media called his fifteen-year-old child and began asking questions. At that point, he felt he had no choice but to go public.

"My client did everything within his power to get this behind him to protect his kids," Watkins says. "And part of that, he wanted to protect the woman he loved. If he wanted this out there, why wait three years? His agenda would have been much better served if he'd done this three years ago."