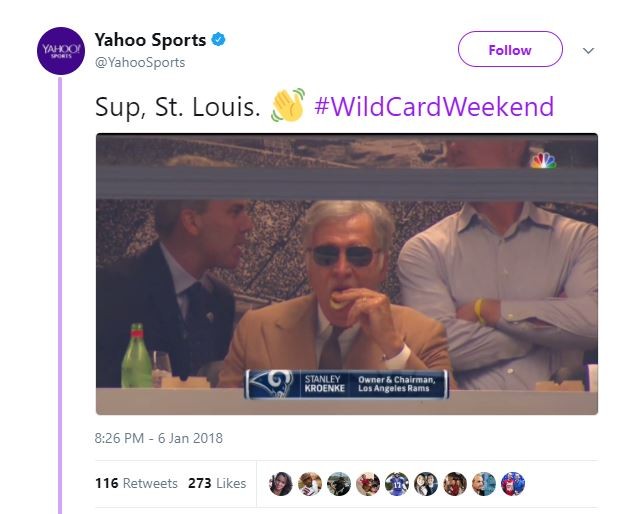 It's Monday in St. Louis, and a good one at that. The temperature is higher than "bone-chilling," there are balls everywhere, and, of course, the Los Angeles Rams' playoff performance this weekend went about as well as a square-tire jalopy trying to win the Indy 500.

Watching the debacle from his private box was team owner and universally acknowledged garbage-person billionaire Stan "St. Louis Is Lagging"  Kroenke. His is a face born to be booed. And yet — AND YET — during the the lead-up to the match, Yahoo Sports decided to take Kroenke's side, tweeting Kroenke's photo and "Sup, St. Louis."

How very droll, yes? Punching down at a city that wasted millions in a last-ditch effort to keep the team while the Walmart billionaire laughed all the way to Los Angeles — so very edgy, so lulz.

Aside from jinxing the Rams on the field, the Yahoo Sports tweet also managed to rouse the collective ire of the city. Hell hath no fury like a bunch of Twitter-savvy wiseacres who've been cooped up for two weeks on end — and so the city's best minds proceeded to drag not just Kroenke, but Yahoo Sports, its social media direction and the entire Yahoo brand.

So please, join us in delighting in the sweet nectar of Twitter burns:

Everybody makes fun of your website and you have some of the worst headline writers in the industry.

That one time when Yahoo Sports tried to troll St. Louis by showing a picture of the worst team owner in Pro Sports. You sure got us there!

Along with the justified vitriol, some replies questioned Yahoo's very existence.

My 12 year old just asked what is yahoo?

Others had definite opinions on Yahoo's place in the tech ecosystem.

google shits on u bitch.

Everybody makes fun of your website and you have some of the worst headline writers in the industry.

Awesome. Are you watching the game with you buddies AOL and Netscape?

Others still noted that Yahoo Sports' tweet was uplifting an unlikable sports mogul over a region housing 2.8 million souls .... which had been fucked over by the equally unlikable NFL.

#Trolling a city that got played by the NFL greed machine seems like an unwise content marketing strategy. What does this gain you exactly @YahooSports?

Just rude @YahooSports #KroenkeSucks and he played with the emotions and money of #STL pic.twitter.com/VmjwN219Jk

What’s this accomplish? Poking fun at a not good situation. Owners contd to verbally stress commitment 2 STL but actions didn’t coincide esp when it was known the move was in works for years - but I’m sure addressing that fact of misdealings wouldn’t have the same splash

After getting this grimy, trashy, sleeze out of this town? Doing JUST fine. @YahooSports, #Stlouis did nothing but support this team. You're picking on the victim and defending a victimizer. #STL #12in18 https://t.co/k0k9vhhPSm