St. Louis' Huge Balls Keep Getting in the Way 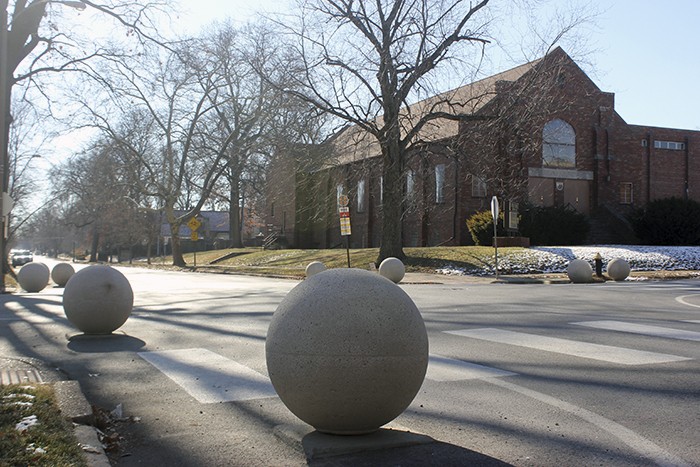 Put more specifically, 6th Ward Alderwoman Christine Ingrassia spearheaded an effort to slow traffic along Compton Avenue in south city, using $300,000 of her ward's budget to install painted bump-outs and large, concrete spheres at six intersections: Park, Lafayette, Shenandoah, Magnolia, Russell and Arsenal. Though similar orbs have been used in the city for years to block off streets entirely, this is the first time they've been put in place to try to control the flow of traffic.

Nicknamed "Slay Balls" after former mayor Francis Slay's sizable testicles (probably?), the goal of the round roadblocks is to slow cars and discourage motorists from blowing through stop signs by narrowing the roadways at the intersections.

“It’s definitely an issue,” Ingrassia told Fox 2 when the project started. “I have a number of residents who have more than one car totaled or sideswiped. People are travelling at a high rate of speed and not adhering to speed or stop signs.”

Paul Whitsitt, owner of Kitchen House Coffee by the intersection of Compton and Shenandoah, was one resident who was excited by the development. Compton, after all, is something of a speedway, especially now that Grand has gotten a "lane diet" to promote its walkability.

"It's not uncommon to see cars blow through the stop signs, to see near-misses. We have a lot of accidents here," he told KMOV in November. "It's one of the major arteries and extends a long way on both sides of the neighborhood, so people use it to avoid Grand Avenue and other major streets."

But now that St. Louis' massive balls are finally in place, some residents have called their efficacy into question, arguing that they've actually caused more hazards on the roadway. St. Louis Public Radio reports that a car struck one of the balls on December 12; the heavy concrete sphere then broke free from its post and rolled away, presumably going on to narrowly miss flattening Indiana Jones. In addition, larger trucks have been forced to Austin Powers their way through turns, thanks to the significantly more narrow roadways at the intersections.

Discouraging larger trucks from using Compton as an alternate route to Grand was part of the plan — it's better for commercial vehicles to use major roadways rather than residential streets. But the narrow turns are proving difficult for residents to navigate in their own, smaller cars as well.

"A lady almost hit my vehicle today while she was making a right turn on to Russell and Compton," writes one resident on Tower Grove East's NextDoor page. "I was sitting way back from the crosswalk. She apologize [sic] but I felt her pain. People do need to slow down and stop speeding, but in this case no one was speeding and we are jeopardizing our vehicles as well as our safety. Insurance company look out it's about to be lots of claims."

"I would pay money and bring friends to see a fire truck or even a small delivery truck make one of those turns without crossing into oncoming traffic," replied another resident. "The concept is good, but the narrowing is too extreme."

Ingrassia says the city will continue to monitor whether the balls actually improve public safety, and if they do not, they may try a different tactic.

“If we need to tweak things, we can absolutely do that,” she tells St. Louis Public Radio. “It’s just too soon to tell right now where we are.”

Meanwhile over at NextSTL, Michael R. Allen, senior lecturer in architecture and landscape architecture at Washington University — and a man who is not totally sold on the effort's effectiveness — has proposed a radical idea:

"Perhaps we can turn lemons into lemonade, and neither complain about the balls or the system that produces them," he writes optimistically. "Do Slay balls have to be boring? What about holding the nation’s first concrete bollard art biennial, inviting artists from all over the world to decorate them?"

Allen is right: We should paint our balls. If they're going to be largely useless and in the way anyway, we might as well make them look pretty.