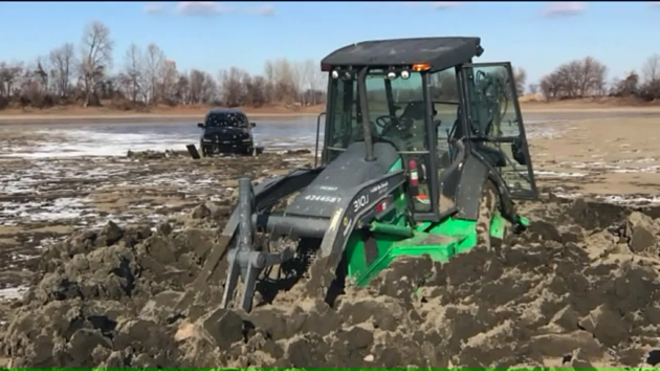 Some really smart guys from Illinois ruined absolutely everything recently when they tried to drive a brand-new Chevy truck over a frozen pond.

Fox 2 reports that two men were testing out the newly purchased four-wheel drive vehicle in Madison County, Illinois, when they decided it would probably be fine to drive over a frozen pond. To the surprise of exactly no one, it didn't work out so well.

“When the lake goes dry in the winter, there’s a lot of temptation for guys to think they can just come out here and go four-wheeling,” Austin Opp of the Chain of Rocks Recreation Corp., which owns the land where the truck is now hopelessly stuck, tells Fox 2.

The incident happened just before sunrise on New Year's Day, which indicates that these men were probably super duper sober at the time.

The truck's owner says he thought they were driving over a frozen field. When he realized they were on a pond he began yelling at his friend, who was driving, to turn back.

But it was already too late.

“It was frozen hard enough that it held him up for a while; then it just collapsed inward," Opp says. "Which is what I’d expect it to do.”

The men were nearly off the pond when the ice began to give way, trapping the truck. Thinking quickly, the truck's owner rented a backhoe and drove it out onto the lake too — where it promptly broke through and is also now hopelessly stuck. (Who could have predicted that?) He says the vehicle hit "an unseen pocket of ice, sand and mud," which just so happen to be the exact components of a frozen lake.

Days later, both vehicles remain frozen in place, with local tow companies hesitant to drive their heavy vehicles out onto a lake for some unknown reason. Come spring, the water at the spot where the vehicles are located will be six to seven feet deep.

“This is the worst I’ve ever seen out here," Opp says. "Nobody’s usually dumb enough to try to go out on the lake, and he did."

The good news, Illinois drivers, is that you're not the very worst of the worst — that would be Joy FM drivers. But damned if you aren't giving 'em a run for their money.