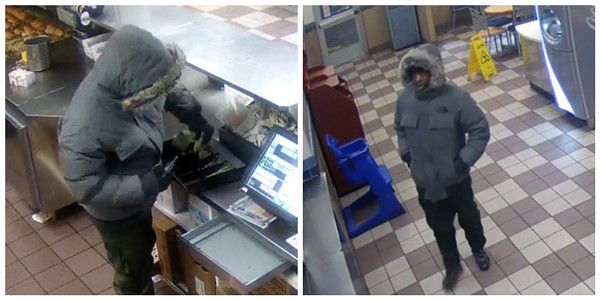 Police are asking for the public's help in identifying a man who robbed a Bevo Mill White Castle at gunpoint on December 22.

Images released by the St. Louis Metropolitan Police Department show the suspect walking into the store at 4524 S. Kingshighway, just south of Chippewa. Police say he brandished a black handgun before leaping over the counter, ordering the cashiers to open the register before helping himself to its contents. He then fled the scene.

The suspect is described as a black male, medium complexion, 5'3" to 5'5", 130 to 150, somewhere between 25 and 35 years old. He is missing teeth in the top right portion of his mouth and was wearing a grey NorthFace coat with a fur-lined hood, green pants and dark gloves.

Anyone with information is urged to call CrimeStoppers at 866-371-TIPS.