Red's Eighth Inning is positively bursting with customers. Every seat at the bar is filled, and the handful of tables that line the walls in the smallish space are all occupied — we're in "standing room only" territory. It's a big crowd for a Wednesday afternoon; normally the scene would be a lot sleepier, one patron says.

The sudden burst in business can be attributed to the shootout that happened within these walls just four days ago.

On Saturday, December 30, two men entered the Carondelet watering hole just before 8 p.m. Each had his face covered. One lingered in the bar's tiny foyer, keeping a lookout, while the other approached the bar.

"He's the one that came in the bar, had a gun out in the open scene, and said, 'Everybody get down, this is a robbery,'" explains Angela Neumann, one of the bar's regulars, who has spoken with several customers who were there when the incident happened.

The incident was part of a disturbing recent trend in St. Louis. In recent weeks, armed robbers have stuck up both Riley's Pub and Tick Tock Tavern.

But at Red's, the gunman's demands were promptly met with gunfire, courtesy of 67-year-old owner Linda Blackwell — the eponymous "Red" — and a shootout ensued. Neumann was told that eight shots were fired in total. Blackwell and the masked man started firing near-simultaneously, Neumann says, and both robbers quickly retreated empty-handed, with the gunman firing blindly behind himself as he fled out the door.

Blackwell was shot three times, twice in the left arm and once in the chest. The chest shot went all the way through and exited Blackwell's back, nicking her lung, Neumann says. Two customers were hit as well: A 65-year-old man was struck in the head and a 30-year-old woman was shot in the ankle, both by the gunman's indiscriminate gunfire.

Neumann says she was told the gunman was struck as well, but she has no further details since the man immediately fled the scene, along with his accomplice.

Police describe the shooter as an unknown black male who was wearing a grey hooded sweatshirt and grey pants. The lookout is described only as an "unknown male." The investigation is ongoing.

Incredibly, all three victims were awake and talking when an ambulance arrived, Neumann says. Blackwell and the man were admitted to a hospital in critical but stable condition. The younger woman's wound was only surface-deep, so she was treated and released that night.

As news of the shooting spread, the bar's loyal customer base banded together to try to help. A large portion of that base consists of current and former firefighters — the walls of the bar are lined with dozens of helmets, antique fire extinguishers and old fire hoses — and they were characteristically determined to help in whatever way they could. 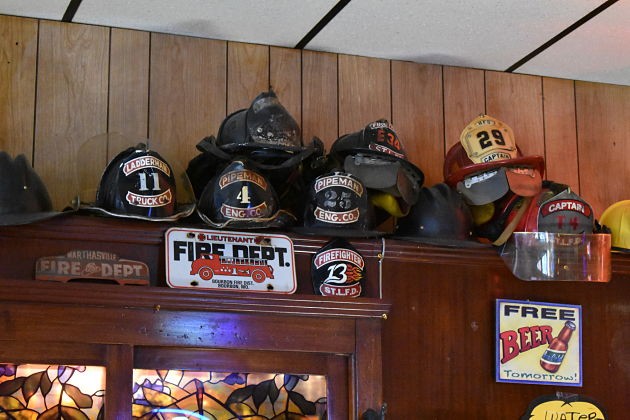 "She's supported us from day one on our bowling tournaments, our softball tournaments we travel out of town with, our fishing tournaments every year —  she donates alcohol," explains battalion chief Ken Mitchell. "Anything we've ever had, since 1990 when she took over this bar. She's always been here for us; we're always gonna be here for her."

He explains that many retirees from the department have their goodbye parties here, and that Red's has become a go-to spot for the firemen in the city. Looking around the room, he estimates that 99 percent of the people present are current or former firefighters.

"She's like a mother to a lot of us," Mitchell adds. "Anything we need, she's been there for us."

Another firefighter, Ken Cox — better known as "Biggin," Mitchell is quick to add, as he's easily the tallest man in the room — organized the group when he learned the bar would be reopening Wednesday for the first time since the shooting.

"I actually just put a Facebook post out to my friends, saying, 'Hey, I'm gonna come down here on Wednesday at noon if anybody else wants to come,'" Cox says. "I understand the economic impact of having a business closed for several days and also the fact that she'll have medical bills. I was hoping to maybe draw in a good bar crowd for her, at least today, to get her started back up and running and maybe get ahead of those bills."

Sarah Stippec, owner of the nearby Off Track Saloon, was one of the people who learned about the effort on Facebook. After seeing the event page, in fact, she immediately called up with an offer to bring food from her establishment. Thanks to her efforts, some 100 chicken wings with sides of mashed potatoes and green beans are on hand in the corner.

Asked what motivated her to pitch in, her answer is simple.

"Community," she says. "I look up to Red. I'm a young business owner and she's always helped the community, so why not help out?" 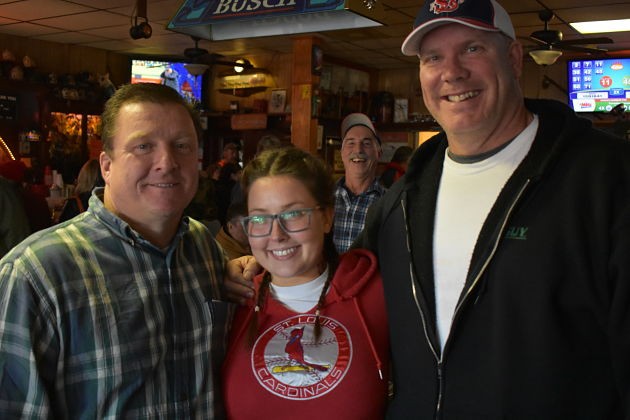 Neumann, who appears to be one of few regulars without a background in fighting fires, also started a Facebook event page encouraging friends of the bar to stop in this week. It's a testament to how highly regarded Blackwell is, and how much her customers appreciate her.

"I've been a long-going customer at the bar, almost fourteen years. It's my home bar," Neumann says. "I know that a lot of people were questioning when she was gonna reopen and I knew there was a lot of uncertainty about it all."

As her bar swells with customers, Blackwell is on the mend, Neumann says, though she is still in the intensive care unit.

"She is improving better and better everyday. She's awake, she's conscious, shes talking, she's eating," Neumann says. "It's just a matter of continuously monitoring that injury. She does have drains on her lung to monitor the bleeding — that's why she's in the ICU. And we're hoping — they're saying if she continues to improve like she is that she'll be able to go home at the end of the week.

That much is obvious. And not only do her loyal patrons and many fans know it, but a few would-be thieves in Carondelet surely got the message as well.